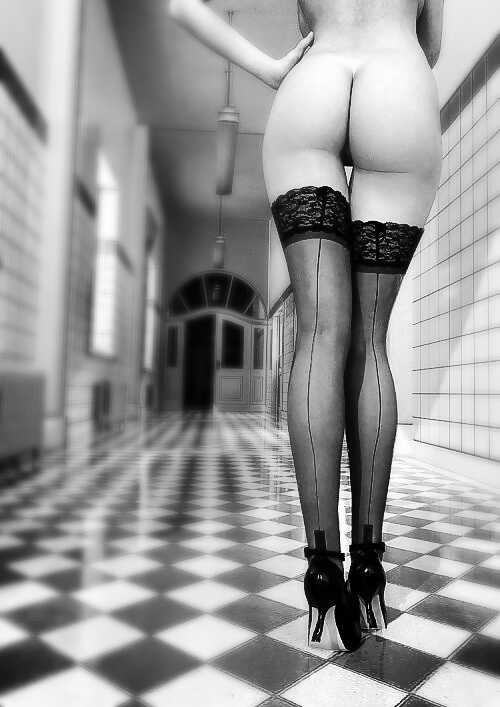 This is my first time posting here so any and all feedback is appreciated. however if you have to be rude about it then keep in mind i'll most likely ignore it. if you like it let me know and i'll post more like it. With that having been said lets get to the story….enjoy
/>
She sighs sitting back in his lazy boy, flipping through the channels finding nothing on, glancing around seeing the place spotless, inhaling.. smelling the dinner she was cooking, wafting through the air.
He said on the phone that he was going to bed home in a few hours, she just wished he would hurry up. She has missed him these past weeks. Turning the tv off she rises and walks into the kitchen, finding the dishes all placed right, the candles burning bright….and still she waits. Walking over to the window she looks out with another sigh and sees a car drive up, her heart starts to beat faster but no, not him, just someone turning around in her driveway. Sitting there on the window seat she watches out the window awaiting His return.

her lips she remembers Him walking out the door, and the raw and tender feeling all over her body from his rough forceful goodbye in the bedroom. Three weeks without Him what is she going to do after he leaves for work. First she cleans up whatever was a mess, no use having it a mess even if he's not there, then taking a bath and gently washing his saliva and sweat off her body she removes his smell along with it mournfully. Running the washcloth over scorched nipples, he always loved her like this before leaving on business.
Getting dressed she goes online and chats a few hours with her friends and eats a quick dinner before going to bed. Reaching over feeling the empty space beside her she cries silently and hugs his pillow close. Hearing his words again "You will not cum until I get back." she stays her hand as it reaches between her thighs. This was going to be />

Sighing yet again she starts to turn from the window when His car suddenly drives up. HE'S HOME! Jumping up she rushes to the fridge to get his beer and as he walks in she stands there her eyes eating him up. Waiting until he gets his coat off she sets the beer on the table and walks over to him, rushing into his arms she lets his tongue snake into her mouth as his hands grip her ass bringing her in for a tight hug.

"Honey I'm home" he says and she laughs as she turns to the kitchen to get his plate ready. Serving him dinner she listens as he talks about his trip, her eyes rove over him hungrily as he speaks. In turn she talks about her time without him, seeing him nod approvingly to this and that. Finishing she removes His plate and cleans while He relaxes in His chair.

"Come here." he says and she responds, a shiver only his words can make races down her spine. Stepping over to his chair he grabs her hands pulling her into his lap and hugs her to him tenderly, just holding her and smelling her neck, her hair for long moments.

" I missed you." His words brush her skin, closing her eyes she turns in his lap and kisses him deeply, her hands coming around to cup his cheeks feeling the scratchy facial hair coming in against her finger tips. Repositioning herself she straddles his lap, her hands go down his chest just enough to pull his shirt aside, her mouth dips to his chin and travels down him neck, feeling his sigh she kisses and licks her way down his chest, flicking her tongue here and there pulling on his shirt, taking it all the way off she throws it besides the chair and continues to love him with her lips, tongue and fingers. Sliding down slowly she groans as his hands reach up to grip her hair in his fist.

Reaching down with nimble fingers she unbuttons his pants, pulling the zipper down taking the pants all the way off over his hips, off his hard muscled ass. Her hands work over his hips as she slides all the way down until her knees hit the floor between his feet, working the waist band of his boxers down just enough she licks the line of where it rested low on his stomach, peeking up through her lashes she sees his eyes on her and then they close in pleasure as she opens her mouth taking the head of his cock in past her wet lips, licking around she plays at first loving the smooth yet hard feeling against her mouth. Going all the way down loving the feel of his hands on her head guiding her she sucks all the way back up, gripping one hand hard around the base she helps her mouth pleasure him as the other goes under and cups his balls, squeezing them gently she pulls against the sac as she continues to suck and devour his cock..harder and harder she works him, feeling a rush between her thighs as she hears his deep growl, loving his sounds she goes faster and faster..his hips buck against her and still she drinks on him, feeling the head at the roof of her mouth she tongues him hard knowing he was going to cum, up and down she moves her head wanting him to release. Purring she lets up, moving her head down even lower the tip of her tongue snaking out to lick his balls, making it into a sharp point to prods at them, around them, under them. Pressing in deeper her lips part taking one globe into her mouth, suckling her hands never stops stroking his cock. Loving how his fingers weave through her hair holding her in place, most women hating it, she was different. Feeling his back tightening knowing he was close she moves back to his cock, worshiping him she sucks, licking from base to tip before consuming him again. He moans louder as his cum shoots into her mouth, letting it slide down her throat she swallows gratefully, moaning herself making the back of her throat vibrate against him, the head of his cock jumps almost gagging her and still she rides him with her mouth draining Him fully.