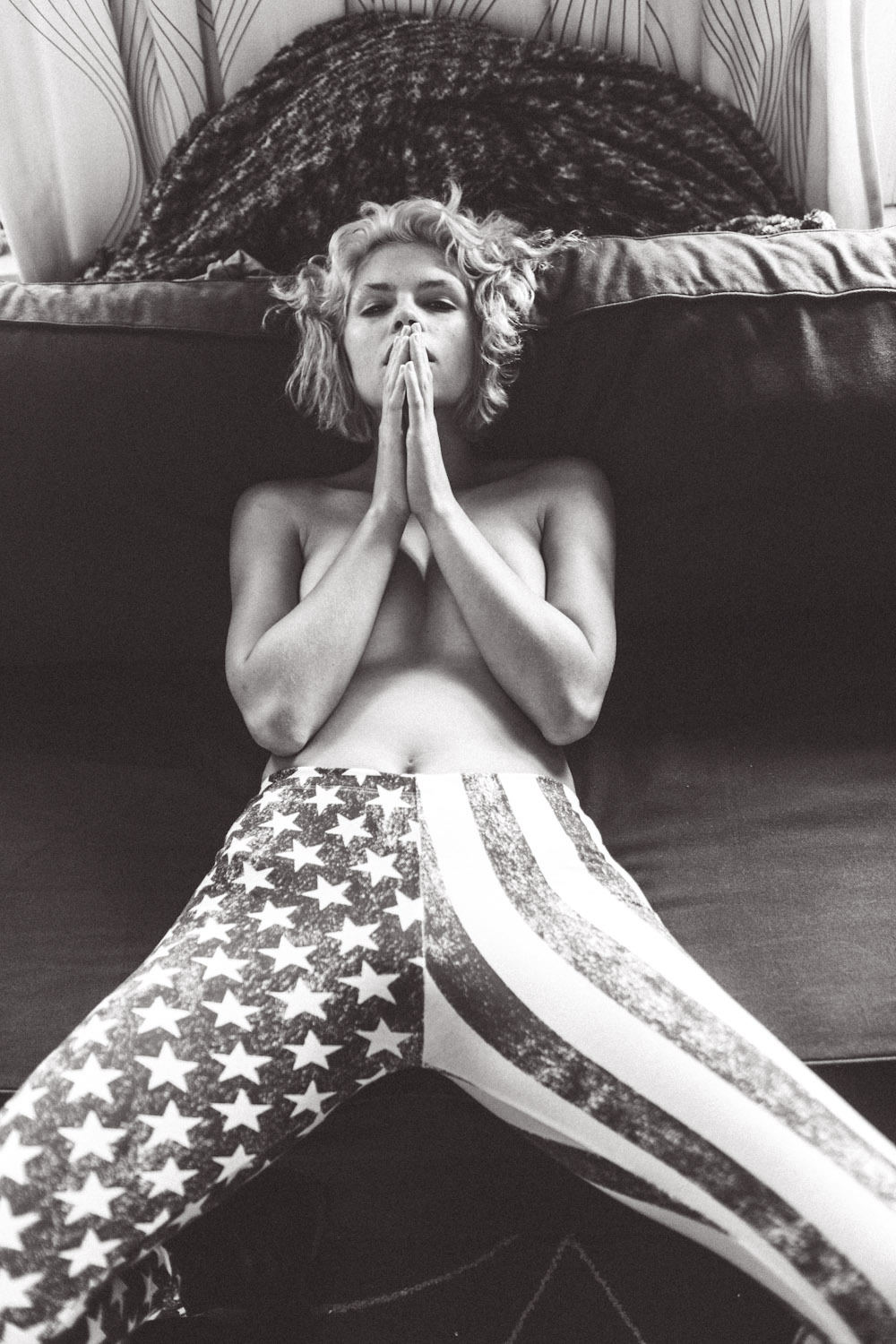 Gil sat down on the edge of the large king size bed and while pulling on his socks yelled out to his wife who was still in the bathroom, "Hey, babe, ya better step on it, we're due at the Martin's in twenty minutes!!!" He waited for a few seconds, listening for her response, but when none was forth coming, he got up and went in to check on her progress! "It was that damn hair dryer," he said to himself, as he pushed open the door! he shouted over the din of the dryer, "step on it, we gotta get going!!!" She turned to face him, and just nodded, and then went back to drying her hair. "Shit," he said under his breath, "I never shoulda come in here," while staring at the cute figure of his naked wife!!! It never failed, he was so crazy in love with her, that when ever he saw her naked, he would get a hardon the size of the Sears Tower!!! She noticed him still standing behind her in the mirror, and while turning back around she said emphatically, "No, Gil, we don't have time for that nonsense, now you go finish dressing, right now!!!" "Baby," he sighed, "look at what you've done to me, are you gonna leave me hanging like this!?!" "Oh, Gil," she replied with a look of resignation on her face, "can't you wait until after the party!?!" He ignored her pleas and turned her around and leaned her over the vanity, while spreading her legs and exposing her tight little cunt and ass!!! He wet his fingers and rubbed them up and down the length of her slit, preparing it for the onslaught that was about to take place!!! Even though she was protesting, her heart wasn't in it, because her cunt was soon dripping like a leaky faucet and she began squirming around, in anticipation of the fucking she knew that was about to begin!!! He leaned over and whispered in her ear, "You know how much I love you, even after ten years of marriage I want you even more than the day I first met you!!!" Oh, Gil," she panted, now turned on to a fever pitch, "p-please, do me now, I really need it bad!!!" It was over very quickly, within a few moments after he entered her, he slammed his thick prick in and out several times, which caused her cunt to convulse and grip down hard on his straining member, which of course resulted in its ejaculating a gusher of hot cum into her tight little pussy!!! After taking a moment to recover, Gil pulled his shrinking cock out of his wife's pussy and said jokingly, "Come on, babe, you gotta stop all this fucking around when were in such a hurry!!!" She stuck her tongue out at him and they both hurriedly got dressed and headed off to the party!!! "Wow," she said wearily, as she snuggled up close to him as they were driving home from the Martin's, "that was the best party I've been to in ages, didn't you think so?!?" "Yeah, it was," he replied, "when Fred put that lamp shade on top of his head and tried to do the limbo, I thought I was gonna die!!!" "Mmmmmm, me to," she sighed, "but I haven't had that much to drink since last year's Christmas party, and I've really got to take a pee!!!" We'll be home in fifteen minutes," he replied, "can't you hold it that long?!?" "I-I don't know," she stammered, while fidgeting around on the seat, "I'll try!!!" Two minutes later, however, she was obviously in a lot of distress and she opined, "Gil, I can't wait any longer, find a gas station quick or I'm going to have an accident!!!" "Jesus, Pris," he said, "why didn't you go before we left Jerry's place, all the stations are closed, and there aren't any around here anyway!!!" she moaned, "what am I going to do, I can feel it coming out, I can't hold it back, I'm gonna go!!!" "Now wait a minute," Gil responded excitedly, "don't go in the car, wait, I've got and idea, over there, look, it's a park, you can go over behind the bushes!!!" "I can't do that," she whined, "what if someone sees me!?!" he said in an exasperated voice, "for christ's sakes it's three in the morning, who the hell is gonna see you except maybe a frog!!! "A frog," she squealed, "I hate frogs and stuff, I'm not going out there!!!" Gil pulled the car over and jumped out, practically dragging his protesting wife behind him!!! "Stop it, Gil," she cried, "I don't want to do this here!!!" Finally over by the bushes, he let go of her and said, "Shut up, Pris, and do your business, there's nobody around, and look, no frogs to be seen!!!" "Oh, you," she yapped back at him, "how am I supposed to do this!?!" "Well," he replied a little sarcastically, "I guess you pull up your dress, slip off your panties, squat down, and let it fly!!!"

"See how much you know, Mr. Smarty pants," she retorted, "I have to take my panties off first, and then pull up my dress!!!" "Oh," he shot back, "if I were a woman maybe I would have known that, but since I'm not, this is the only way I know how to do it," as he unzipped his pants, pulled out his cock, and let loose a golden arc of piss that glistened in the moonlight!!! "See, easy as pie," he said with a laugh, "now it's your turn!!!" With her panties off, she hiked up her dress and spread her legs wide apart, and without bending over, let loose with a stream of hot piss that seemed to do on and on forever!!! "Oh," she said with a sigh, "does that ever feel good, I couldn't have waited another second!!!" Just as she was finishing up, Gil yelled, "Look out, Pris, a frog!!!" She nearly jumped a foot in the air, and lost her balance, but Gil was there to grab her before she fell and whispered in her ear, "Watching you, was very arousing and erotic, I want you right now!!!"

She was going to protest, but he grabbed her by the arm and led her over to a picnic table that was just a few yards away!!! He pushed down on her back and said in a thick voice, "My, god, Pris, just seeing your pussy bulging out and having that stream of potty coming out of it, I am so fucking turned on I can't stand it!!!" Her dress, still up around her hips, left her naked below the waist and ready to be taken!!! While he pulled out his cock with one hand, he fingered her slit with the other, causing her to moan and slide her ass around on the dew covered table!!! He took the head of his pecker and ran it along her slit, teasing her clit until she was begging for him to fuck her!!! "Mmmm, I don't know Pris," he said doubtfully, "maybe I shouldn't, what if somebody sees us?!?" "Are you nuts," she panted, "it's almost four in the morning, all of the sane people are home in bed, now fuck me, now!!!"

Unlike there quickie before the party, this time Gil took his time, using long even strokes, making the sensation on the head of his pecker last just as long as it could!!! Priscilla, on the other hand, while she enjoyed long hard fucks, was more in the mood to get rammed hard and fast!!! "Come on, lover,"she gasped, "don't do this to me, you're just teasing me, do me hard and fast, just like I like it!!!" He chuckled a little thinking about how it always turned out this way, she would resist him, but in the end, she would turn into an absolute little cock hound who needed it right now!!! "Well, if you really want it that way," he said softly, "then how about like this," as he reared back and rammed in and out of her defenseless pussy with brutal ferocity!!! She wrapped her legs around his back and pleaded, "Oh, fuck yes, ride me, do me harder, oh my fucking god I'm cumming!!!" The body of a little angel and a mouth like a whore, it was more than he could take, as his pecker spasmed hard and released a heavy load of cum into her waiting cunt!!!" Both of them moaned together and said, "I love you, I love you so much!!!"

On the way back to the car, Priscilla asked, "Am I ever gonna be able to take my panties off in front of you with out being attacked!?!" He looked down at her and with a wicked laugh asked, "Do you wanna lift that dress and find out!?!"