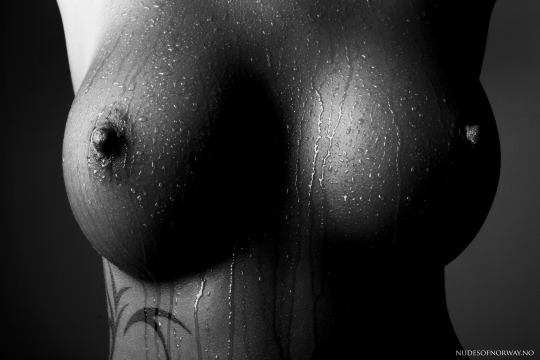 Her body trembled with excitement and anticipation. Her eyes were wide open, staring at me wantonly, desperate for me to take her and use her at my will.

I teased her, approaching slowly, gently running my hands over her sexy body paying special attention to her swollen breasts and sensitive nipples, coaxing them until they stood out long and hard.

I kept kissing, sucking and licking her nipples and made my way all over her body ensuring not to touch her hot wet pussy. My wife was already worked up, her musky scent filled the air. I knew she was ready for anything I desired.

Yes, we were at it again. Our first dungeon experience had taken us to new heights of pleasure. We had not been able to stop talking about it and fucked every chance we got.

Still novices we had a lot to learn and try, but both of us had gone a little psycho about this new world we were discovering.

With a hard pinch on each nipple, a short loud scream followed by the word â€œfuckâ€ came from her mouth. Instantly I pinched then again not letting go.

A wild look came across her face as I reminded her of the rules. She knew what I meant but began to call me a â€œcuntâ€ and tell me to â€œfuck offâ€.

I pinched her nipples harder and harder and twisted and pulled until she screamed again and shut her mouth. I released my grip and slapped each breast hard several times then walked away leaving her squirming on the leather bench. Shiny wet patches appeared as her wet pussy left its mark, smeared across the leather bench as the smell of her wet cunt became stronger.

Taking deep breaths to contain my own growing excitement, I picked up a long, thick rubber paddle with a primitive handle carved into one end. Moving slowly back towards my wife waving this ugly chunk of leather in front of me, I ordered her to stand up and bend over the rounded top of the bench.

Knowing what was to come my wife nervously did as she was told. As soon as she was in position I let her have four firm strokes of the paddle on each cheek of her sexy ass.

I told her in an angry tone that her â€œinsolence would not be toleratedâ€ and let loose with a flurry of blows to her already red swollen ass. Her screams grew louder so I found the ball gag on the trolley, placed it in her mouth and buckled it tight around her head and neck.

Holding her hair I roughly stood her upright and had her lay face down along the bench, she shivered slightly as the wetness on the bench came in contact with her chest and tits, coating them with her own thick juice.

I shackled her wrists and ankles to the benchâ€™s legs leaving her head hanging over one end and her beautiful ass and pussy hanging over the other. Her pussy lips were open slightly, covered in the juices she had been leaking for some time.

Unable to control myself, I released my fat, throbbing cock from the restraint of my shorts and with one thrust shoved it balls deep in her hot cunt. Pussy juice squirted everywhere and ran down my balls and legs as I slammed into her.

Trying to regain some self-control I pulled my pulsing dick from her pussy, and took deep breaths to hold back the pending eruption. Her wet, steamy cunt and tight ass looked perfect. On display just for me.

I used my fingers to push her hot slippery juices up to her puckered ass hole then gently but firmly pushed two fingers into ass, her own juice lubricating her passage.

In no time at all her sphincter muscles relaxed allowing me easy access for which I took full advantage. Her muscles relaxed more and more with each thrust. I added another finger and before long another until I had four fingers and half my hand fucking my wifeâ€™s ass.

She panted and moaned as I shoved my hand as far inside her ass as I could. I inserted my thumb into her soaking wet cunt as I continued my assault on her ass.

By now my cock was aching for relief. Removing my hand from her wet gaping holes I quickly replaced my thumb with my cock.

Forcefully I thrust deep into her hot slippery cunt, her juices spraying out as I did. My wifeâ€™s moans and groans enticed me more as she looked at me over her shoulder, urging me with her eyes to fill her cunt with my seed.

Sweat ran from my face onto her back as I struggled to catch my breath.

I moved around and undid her ball gag.

My dick was hard again in seconds.

She gagged and choked slightly as the head of my cock made its way down her throat until once again she was able to lick my balls and taste our juices still coating them.

After several minutes of fucking my wifeâ€™s throat I withdrew and secured her ball gag firmly back in place.

Hanging on one wall were various cuffs, collars, chains and weird restraints. I chose a heavy black leather collar and short chain leash.

I fixed the collar to her neck tight but not enough to restrict her breathing.

Releasing her wrists and ankles I allowed her to stand. Drawing her to me with the leash we kissed deeply, our tongues entwining each othersâ€™ like we were wrestling.

Her tongue thrashed wildly in my mouth as we kissed, she got wilder and wilder as I continued to slap her cunt. Her arms were locked around me trying to pull me closer to her.

Stopping suddenly I gently pushed her away, She stood panting, sweat covering her body, pussy red and swollen with her erect clitoris poking from between the fold of her lips.

I tugged on the leash and led her to a wall across the room.

For the first time my wife was able to see the assortment of toys and accessories at our disposal.

Leading her slowly around the walls of the dungeon, I allowed her to feel and examine whatever took her interest.

Among the usual sex toys were lots of devices we had no idea about. Made from different materials some looked scary and some looked down right dangerous. Regardless everything seemed to add to our imagination, increasing our desire to explore.

After showing her around the walls I led her to an cross-shaped timber structure with four restraints attached to it.

Once again I strapped my sexy lady up. Leaving her spread eagle and vulnerable I returned to some of the items she had shown interest in and began to re-examine them trying to gauge her reaction as I had done with the black monster last time.

However she was switched on to this and tried to show no emotion at all.

I gathered several items from the wall and wheeled the trolley into place so my wife could see what I was doing. She squirmed and groaned impatiently as I fiddled with the items on the trolley.

I let her hang, fiddling unnecessarily to further build her frustration.

She humped wildly on it as I fucked her hard with the rubber cock. Once again her juices flowed, soaking my hand. I had never seen her so turned on. She was in her element and loving every second of it.

Next in line were the nipple clamps. Sharp screams came from her as I attached the clamps to her erect nipples. I then ran short chains from the clamps up to her collar, ensuring they were tight and constantly pulling on her sensitive nips.

Reaching for a small flogger I start to strike my wife across the abdomen and thigh, each stroke sending her into convulsions and pulling hard on her nipples stretching them further than ever before.

I let her have it, flogging her again and again until her belly and thighs were bright red and swollen. The look on her face told me we were fast approaching the limit of what she could take so I eased off and slowly stopped the flogging.

The look of anger and daggers in her eyes, soon turned to the look of a wanton whore.

I asked if she enjoyed being my whore slave and weather she wanted me to continue. She nodded approvingly and thrust her cunt toward me, urging me to give her what she so badly needed.

We became one as we both neared the point of no return. Pussy juice ran down her leg as we continued to fuck like there was no tomorrow.