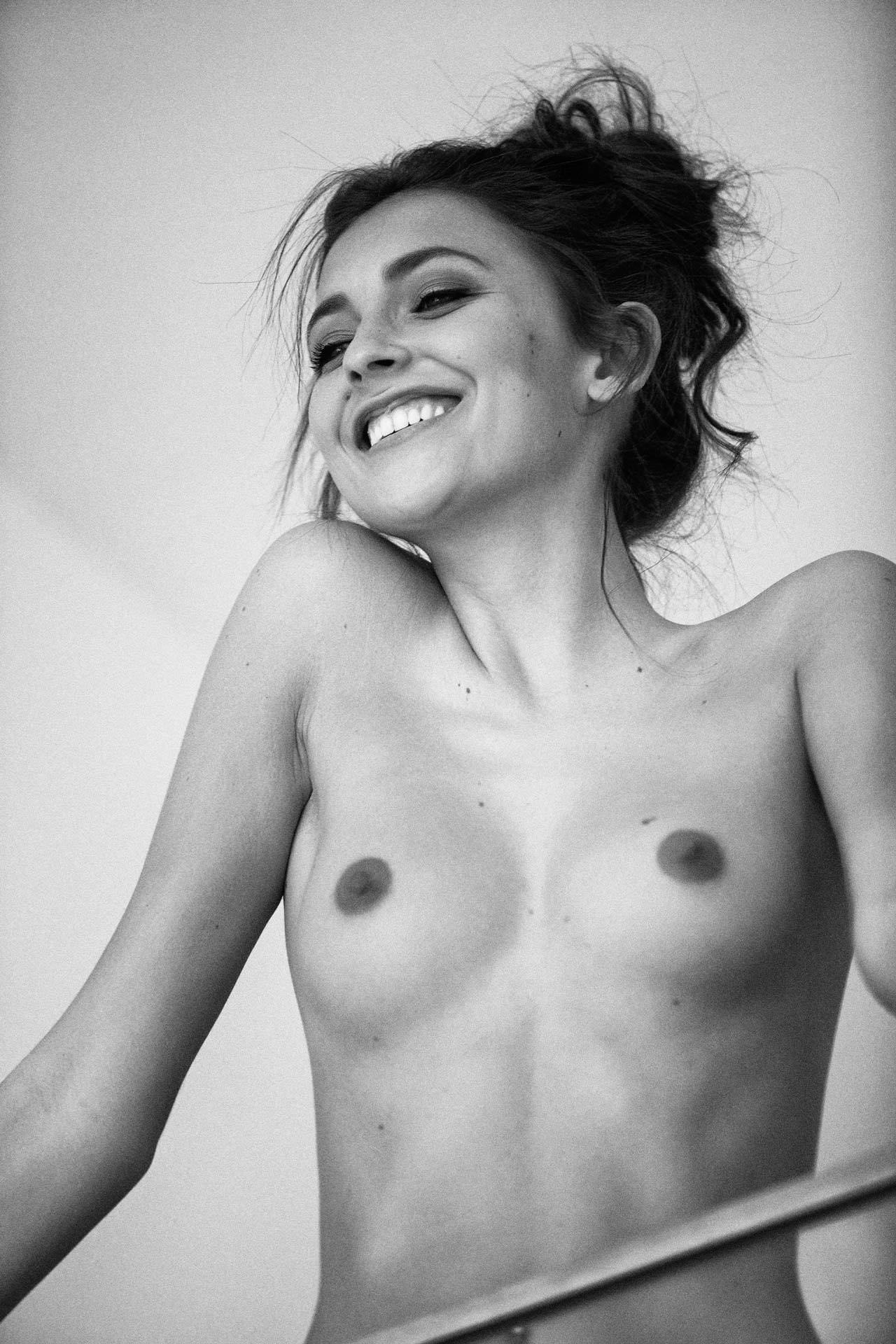 Opening an eye after removal of a thin silky blindfold my wife, clearly puzzled yet excited, gazed at her surroundings.

It was difficult to see in the dimly lit room. She began to make out the shapes of different bizarre looking devices with ropes, chains, whips, paddles and other items â€“ too many to take in – hanging from the walls.

We had spoken often of her fantasies of being dominated and how excited the thought made her, but we had never tried before now. After much searching I have found and rented a dungeon for the evening.

Before she had chance to speak I moved behind her and inserted a gag ball in her mouth, securing it firmly with the leather straps. I could feel her body tense and her start to shake nervously. I began removing her clothes, slowly caressing and tickling her body as I did so.

She stood naked, sweat glistening on her body – her firm pert breasts standing up with her nipples hard and stretched tight.

Hanging above her was a bar with leather cuffs attached. I lifted her arms and secured her hands high above her body.

She was now vulnerable to whatever I had in mind.

Turning her to face me I pinched a nipple between thumb and forefinger, squeezing hard and causing her to scream into the gag.

I alternately licked and caressed her nipples, then squeezed and flicked them whilst sneaking a hand between her legs and lightly brushing over her pussy. Opening her legs wider I started to rub her already wet gaping hole. She was clearly loving it.

I roughly inserted 2 fingers into her hot, moist cunt and began to pump hard and deep whilst using my thumb on her clit and pinching and biting her hard nipples. She writhed in pleasure, dropping down as low as she could on my fingers trying to push me deeper inside her.

Muffled screams came from behind the gag as she approached orgasm.

At this point I stopped, removed the gag and thrust my wet fingers in her mouth for her to clean. She licked her juices hungrily. She was on the edge of orgasm and unable to her herself to tip over.

I slowly walked around the room examining the array of toys and contraptions designed to please with pain.

I laid it in on the floor between her legs telling her she would take it before the night was through.

My wife asked me what was on the table. I abruptly told her to speak only when asked and reminder her she was my slave for the night. She opened her mouth to speak again so I grabbed a paddle from the wall. She giggled. Her giggle didnâ€™t last long as I swung the paddle against her beautiful ass.

I was getting into this more than I thought I would.

My wifeâ€™s eyes were on fire with passion, she writhed and fought against her restraints, pushing her body towards me, wanting me to continue.

I grabbed her hair, pulling her towards me and kissed her deeply. She wrapped a leg around me trying to drag me towards her gaping wet pussy. She was in ecstasy, frustrated and needing something inside her.

Stopping suddenly, leaving her on the edge again, I moved behind her, reached up and released her shackles. She dropped to her knees, hurriedly taking my cock from my pants. She licked passionately up and down the shaft, wetting it with her saliva before closing her lips around the head and forcing it down her throat.

I laid her on her back and secured her wrists and ankles leaving her spread eagle and open for anything I desired.

Leaving the black monster on her naked body I reverted back to the service trolley and slowly wheeled it to a spot where she could see the bizarre goodies on offer.

I started with some nipple clamps.

I chose a pair resembling alligator clips with a chain between them. I draped them across her breasts and pinching a nipple between my fingers I pulled it up stretching the nipple and attaching the first clamp.

A sharp look of pain came over her face replaced quickly by a look of passion and fire. Clamping the second nipple I gently start to tug on the chain joining them. Each movement caused my wife to writhe in pleasure and pain.

With the black monster still on her chest I started slowly insert the stainless steel cock. The coldness made her shudder as it passed her hot, wet pussy lips. Slowly I inched it into her womanhood. Once it was buried as far as possible I began to pump it in and out as fast and hard as I could.

She screamed so loud my ears rang.

I continued the assault on her pussy until she could take it no more and begged me for mercy. I gave one last push and left the steel cock as deep as possible inside her.

I now reached for a riding crop and pulled back her pussy lips to expose her very swollen clitoris. I gently rubbed it with the crop before gently spanking it â€“ each
slap bringing uncontrollable movement and tugging on the nipple clamps.

My wife was now on the verge of a massive orgasm. One last blow with the riding crop and she climaxed. Her convulsions dislodged the black monster from her chest and it fell to the floor. The nipple clamps continued to stretch her and bringing her to orgasm after orgasm until she collapsed back exhausted.

I released her ankles and re-shackled them to posts behind her shoulders so her wet gaping pussy and tight puckered ass were exposed. I pushed 3 fingers into her hot, wet cunt and thrust continuously while working one digit into her tight ass. Slowly her muscles relaxed allowing my finger to go deeper into her tight hole.

Her body began to writhe and squirm as her passion began to build once more. My fingers worked feverishly in and out of both holes. By now my cock was ready to explode.

I moved over her upturned pussy and thrust my dick as deep as it would go into her juicy gaping hoe and pounded for all I was worth. The pressure built to the point of no return.

Relieved but not finished I reached for the black monster. My wifeâ€™s eyes rolled with excitement and anticipation.

I brought the monsterâ€™s head to her swollen waiting lips. With firm but gentle pressure the head started to disappear between her labia. Her body tensed as she concentrated on taking the massive tool.

Slowly but surely I worked nearly half of it inside her as she screamed and bucked but urged me to shove it deeper. More and more pressure saw three quarters of the monster buried inside her. Her pussy lips were stretched further than ever and her clitoris was standing out proud. I worked my tongue over it until I could until I saw signs of an oncoming orgasm.

My cock was fat and ready to go again. I held the monster deep inside her stretched hole and started to work my cock into her ass. Again she screamed but urged me to fuck her hard.

She told me to come all over her and I reminded her with a hard slap on the ass that I was in charge and I would make that decision.

I pulled the monster free and look up to see passion and pain on her face.