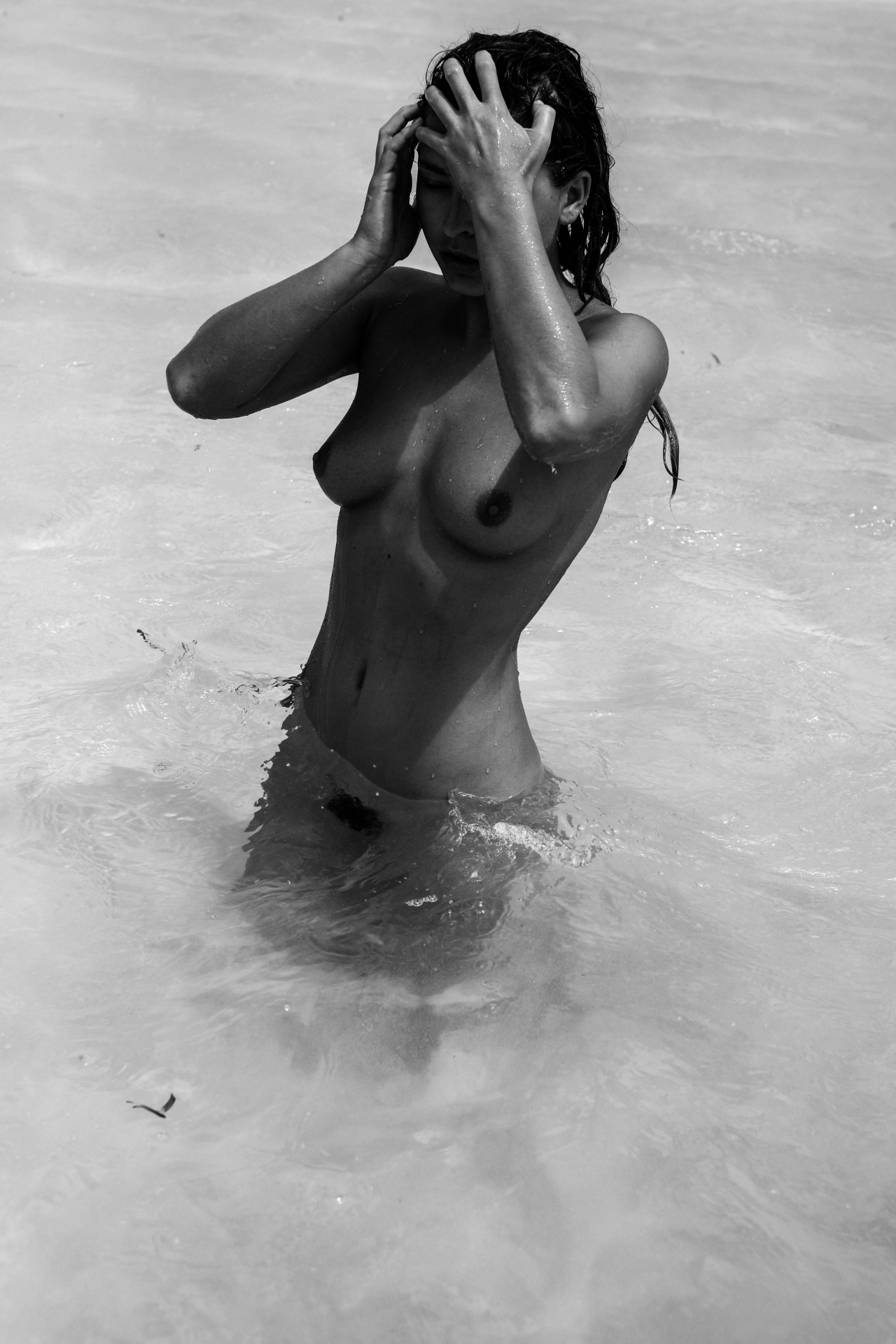 Emily Olives and Amber Wilshire kissed each other as they walked up the room. They swore they could hear people fucking, and they wanted in.

The girls carried a bottle of wine with them they put on some make-up in the bathroom.

“I can’t wait to see them fucking!” Emily said excitedly, as she broke the kiss. They arrived at the door but Amber stopped short.

“Hold on, appearance check.” She said. Emily brushed down Amber’s long, straight, platinum blonde hair and lowered her already tight corset dress; it made her C-cup breasts pop out more and her curves seem curvier.

The two smiled and opened the door. The couple fucking stopped and looked in their direction. Emily and Amber grabbed hands and smiled.

“Well you guys sure are loud.” Amber said.

The girl tried to say.

“It’s okay. We came to join you.” Amber said, closing the door and locking it this time. Amber & Emily began to strip down and they enjoyed the couple’s nervous stares.

“My name’s Amber, and that’s Emily.” Amber said, pointing to each other.

Michael felt his cock stiffen again at the sight of these girls.

The Amber girl has very tan skin and looked like she spent her summers working out and bathing in the sun. Her straight, platinum blonde hair looked like a waterfall cascading down on her breasts and her brown eyes made her look like a girl next door. Her C-cu breasts were perky and although she wasn’t that curvy, she was still hot.
Emily, on the other hand, was the complete opposite; she had pixie cut red hair and pale skin with freckles scattered about. Her eyes were the same color as Millie’s except a little bit darker. She was skinnier, with little to no curves and A-cup breasts, but she managed to make it look hot.

Amber sauntered over to Michael as Millie moved over next to him. Amber slowly (and agonizingly) straddled him and began to rock her hips back and forth.

“You like that dirty boy? Wanna know something? I’m a slut.” She whispered in his ear. His breathing was rapid and Amber laughed, grasping his cock in her hands. She slowly moved her soft hands up and down his meat, her breasts swinging as she did this. Michael loved the feel of Amber’s hands around his cock, maybe even more than Millie. After all, Amber made Millie look like Mother Teresa.

Emily, on the other hand, pushed Millie on the bed and sat on his hips.

“I love your pretty titties. I don’t have really big ones, so I’d love to play with yours.” Emily said seductively.

“Then do it.” Millie replied, grinning.

Emily crashed her lips against Millie’s and used her fingers to massage Millie’s breasts. The jiggled in Emily’s hands and she moaned in pleasure.

Emily’s tongue down Millie’s throat just made Millie hornier. She wrapped her legs around Emily and then began to play with her clit.

“I see you like pussy.” Emily said, smiling. Millie nodded and Emily got off of her. She ducked her head swiftly and breathed in her pussy’s aroma. Moaning, Emily began to lick Millie’s pussy, in and out fast. Millie moaned and squirmed, loving the feeling of a tongue in her wet pussy.

stop!” she breathed out.

Instead of answering, Emily started to lick her pussy slower. Millie played with her breasts as Emily’s tongue dug into her pussy and looked over at Michael.

“You like that baby? You like my little fingers around your big cock, squeezing your balls?” she whispered in his ear.

He moaned, feeling an orgasm wavering by.

“I bet you like my pretty little mouth wrapped around your cock better.” She said, kissing the tip of his cock.
A wave of excitement passed through him and he closed his eyes and moaned.

“Oh, you definitely like that.” She said, licking his hard rod. Michael moaned as Amber all around his cock. Michael grabbed her hair and pushed her face further into his cock. He could hear her gagging but didn’t feel any remorse.

such a little cocktease! You’re going to be my slut now. MY SLAVE.” He said, pulling her up by the hair and looking her in the eye.

Emily and Millie were looking at him too. Amber had a pure look of terror in her face, as much as she tried not to show it.

“You girls are cockteases too. You’re all going to be my slaves.” He said.

Emily and Millie exchanged a nervous glance and then face Michael again.

“You can’t just force us out of here! People will notice!” Amber said. Michael slapped her and laughed as she looked at him in surprise.

“Too bad it’s my house you cock loving whore.” He said. He grabbed Amber by the neck and dragged her to the middle of the bedroom. Emily and Millie looked in horror and anticipation.

“You two, get over here.” He said, motioning the girls. Emily and Millie followed his orders and stood in the center of the room.

“Put your asses in the air.” Michael growled. The girls all complied to his orders and Michael smiled to himself.

He couldn’t believe this was actually working. He couldn’t believe how easily submissive these girls were at the tone of his voice. Ideas swam through his head; ideas like what he would do to and with them and the guys he would have over and the parties he would throw; the ideas were endless.

Without saying a word, Michael thrust his hard cock into Millie’s ass and she screeched in pain. Michael laughed and thrust harder, while slapping Emily and Amber’s asses. The cried in pain and whimpered “Please don’t do this!”

“Shut up. Oh, and by the way, you’re all getting new names.” He said. He pulled out of Millie and order them to all sit down, Indian style.

He pointed to Emily first.
Betty.”

Then to Millie.
Bonnie.”

Tears formed in eyes and Michael reached into the closet to get some belts. The girls looked in horror at what he was going to do and he chuckled.

He began to tie knots at each of their ankles and tied them to the foot of the bed.

“Stay here.” He order, putting on his clothes.

After he got everyone out of the house, Michael grabbed the 3 girls and shoved them in his truck. They whimpered next to each other (all of them naked and with their own panties stuffed in the mouths)

Michael had decided that they were going to his country home; after all, it was a better place to raise 3 sluts.

After 3 hours of riding around the four finally made it to the farm house. Michael grabbed the girls by their linked arms, and led them into the barn.

The old barn had lots of hay in each of the stalls and a few animals. There were about 10 dog collars in the barn and supplies that was perfect for training these sluts.
He ordered them to sit down and then smiled crudely at the girls.

“Do you like your new home sluts?” he said, gesturing to the small stall. They looked at him, horrified and cowered, naked and scared.

“Too bad, it’s your new home. I’ll let you sink in for a few hours and in the morning I’ll bring you breakfast; I’ll get you your dinner later on. And in the morning, you girls will get some exercise. And once in a while, one of you will sleep with me in the main house; I might even let one of you live with me.” He said.

He took the panties from their mouths and took out the rope from their arms. Forcefully, he shoved the girls in the small stall, locking it at he left.

“Oh and by the way, your bathroom is in your stall. It gets cold at night, so you might want to huddle together.” He said wickedly. The 2 girls cried while Michael left.

He closed the barn door and smiled to himself. As cruel as it was, he needed his sexual desires to constantly be filled. Imagine how easily it’ll be with sex slaves on hand at all times. He couldn’t wait till his buddies could come up here with him, but that would have to wait until the girls were well trained.

The girls huddled next to each other, their naked bodies pressed together.

“This is getting really scary, guys.” said. and nodded but inched closer together, as it was getting closer. They hear a moo and closed their eyes; it was surreal how their lives had changed in a matter of seconds. One minute, they were fucking and having a good time and the next, they were in a tiny barn stall, cold and hungry, waiting to see their fate.

“We can’t make him angry guys, because it we do then imagine what will happen then.” Bonnie said. The girls nodded and closed their eyes; hopefully, it was all just a bad dream.

He whistled as he entered the barn and found the girls sleeping in te corner. He grinned, whipped out his cock and opened the stall.

The girls were rudely awoken with the feeling of something wet drizzling on them. They opened their eyes and found Michael showering them with his piss. The screamed and he laughed, closing the stall door behind him.

“Hello my sluts.” The girls winced but stayed completely still.
be happy to hear I have your dinner and some pj’s for you.” He said, putting down their food. The girls greedily gobbled their food as Michael pulled out the outfits.

By the time they were done, Michael had emptied his bag. They looked at the outfits; one was a silky white bathing suit with a bunny tail on the back and bunny ears near it. The next was a black corset with a itsy little thong and some stilettos. And the last was a school girl type outfit.

“The bunny is for Bunny, the corset is for Millie and the school girl is for Emily. Put them on. Now.” He said. The girls scrambled to put them on and Michael watched with glee. He liked Bunny the most. IT was her slutiness that enticed him the most; he couldn’t care less about the other girls. He knew that Bunny would always be the one inside the house and he hoped that she would bear his children one day; the other sluts could tend to his needs while she’s cooking and cleaning.

Once the outfits are on (and Michael wakes up from his day dream) Michael handed them the water.

“Goodnight, my sluts.” He said before closing the door and leaving the sluts for themselves in the cold, dark barn.