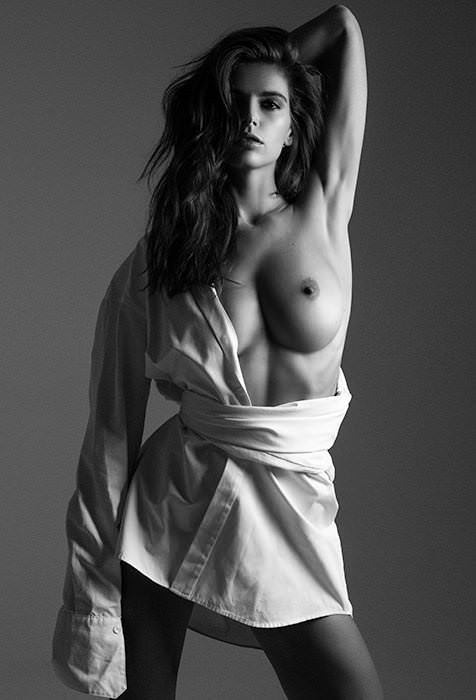 I have written about my friend D before. He and I have known each other for many years. Some time ago, we did some remodeling jobs on the side. That is how we met Helen.

A landlord saw an ad we placed for remodeling work and contracted for Dand myself to do some work on one of his rentals. We were doing some insulation, roofing repairs etc. The tenant at this two story single home rental was a woman a few years older than myself. When we arrived, she was very friendly and followed us around some. She made several suggestive comments and let us know that she had moved to our town recently to separate from her boyfriend.

As we worked through the second or third day I was on a ladder looking at the overhang. I glanced into the closest window and saw Helen walking around in her room with a t-shirt and panties on. I could see that she didnt have a bra on. Her body was full and her breasts were a little saggy but she had a nice ass with a hairy muff peeking around her panties.

I watched to see what she was going to do and she just wandered around the room and picked a few things up from the floor, facing away from me each time. It was obvious she was aware of my presence but didnt want to look directly at me. I hurried down the ladder and went up to her room.

I knocked on the door and she answered by opening it far enough for me to see one of her breasts through her t-shirt. I explained that I had been working outside and I didnt want to frighten her by the noise. She stepped back and let me in the room as she walked over to the window my ladder was near. She looked out and said "Arent you afraid of heights?" I looked out the window and said that I wasnt.

As I looked down, she leaned against my back as we both stuck our heads out of the window. We looked down and side to side and down again. Almost anything to delay while her breasts were against my back. Finally, I stood up and turned to face her.

I pulled my cock out of her mouth and pulled her to her feet, at the same time I pushed her backwards until her legs hit her bed, she leaned back and I lifted her legs at the same time. This resulted in her moist pussy showing through her panties. I lifted her legs and pulled her panties off and then put my tongue between her pussy lips. She was very wet and her pussy juice was slippery and sticky at the same time. I could feel her moving away from my mouth but I grabbed her hips and held on until I brought her to the edge. She came very hard and smeared juice all over my face, shuddering and trying to be quiet at the same time. I think she was afraid that D would hear us.

Pushing her back on the bed, I got between her legs and brushed the head of my cock between her lips. She had one of those slightly hair pussies that had puffy lips from coming and lots of juice running over the crack of her ass. I looked in her eyes and she pumped her hips against me so that the head of my cock sunk into her and then out. I started to pump into her in earnest and she wrapped her legs around my hips and held on tight. "Hurry" she said. I didnt need any more incouragement. I pushed and pulled and smeared pussy juice all over the front of my crotch as I fucked her. She was a fairly quiet fuck and the bed was solid. We didnt make much noise but after about 10 minutes I saw a shadow cross the crack under the door. I realized that my friend D was outside. This pushed me over the edge and I lifted her legs higher as I grabbed her ass. Fucking as hard as I could, I came in her pussy, falling in a sweaty heap on top of her.

As we slowly recovered she wiggled out from under me and pushed me on my back. She went back to sucking my cock and balls until I was getting horny again. Unfortunately, I had to finish and we just hugged and she kissed me with her sticky lips. I went back down stairs and D was looking at me with a big question in his eyes. "Well?" he said. I just smiled and told him he should have come in the bedroom. We joked for a few minutes and I could see the bulge in his pants but we had to finish and leave for the day.

A few days later we were back on the job and spent some time smiling at Helen as we worked. After a few hours I suggested we go out and have a few beers later that night.

It got to be about 9 PM and I picked up Helen. We went to a bar and had a few beers and I suppose it wouldnt suprise you to learn that D showed up there too!! I suggested we go to another bar and we all left in my Suburban. I guess I was distracted because I took a wrong turn and ended up in a farm field out of sight of the road.

The weather was warm and we stopped to talk for a few minutes. Helen was between D and myself. She was comfortable and soon the talk turned to sex. She said she liked being with me prior but she wondered if D liked her or not since he seemed to ignore her. He was a little embarassed but he commented that he certainly did like her and was sorry that he missed out on the fun.

Helen said, "Well I guess I wont ever know what I missed will I?" D proceeded to take his cock out of his pants and sat there stroking it. Helen reached over and stroked it at the same time. Effortlessly she leaned over and started to suck D's cock. I could hear her making some noise and watched in the dim light as her head bobbed up and down. As she leaned forward I could see more and more of the backs of her legs until her pussy came into view. She didnt have panties on and she had shaved her pussy lips.

Reaching down I felt the silky juice oozing out of her cunt. I leaned forward and could smell the musty yet fresh pussy. I licked her as she sucked him and no time she was bumping back at my face with her ass. After a few minutes she changed position and lay on the seat with her pussy facing D. He is a fairly tall person and he opened the door of the suburban to stand next to it. Pushing her legs up he worked her to the edge of the seat and started to fuck her with long steady strokes. His cock is nice and it looked excellent slilding in and out all slippery with her juices.

She was laying with her head near the middle of the front seat and I kneeled on the seat with my right knee and stood on the floor board with my left leg. This allowed her to take my cock in her mouth. I could feel D thrust into her as her mouth was forced back and forth on my cock. She was doing the best she could to get me to cum but I wanted to watch her getting fucked for a few minutes first. I lifted her blouse and pinched and twisted her nipples while she sucked me.

D stroked in and out and after a few minutes he was clearly close to cumming. I pulled out of her mouth and ran around to his side of the truck. He was sweating and panting as he pushed for all he was worth. His balls were slapping her ass, his tight grip on her ass was leaving marks from his fingers but not hurting her. Getting down close to his ass, I reached between his legs and squeezed his balls, turning them slightly to tighten them up. The result surprised me. He pushed hard once, straighted up with his cock as far into her as he could go and then he totally lost control and bucked and fucked his balls dry. I could feel them pulsing in my hand as he pumped and pumped.

He backed off and I pushed her all of the way back onto the seat until her head was hanging off of the drivers side of the seat. He went around and Helen was soon sucking on his cock, trying to get it hard. I got between her legs and looked at her juicy cunt. It smelled so good and started to lick her clit. She pushed the back of my head into her pussy and sucked like crazy on his cock.

Lifting my head, I watched her sucking D's cock. I positioned my cock between her lips and slid in with out any effort at all. As I fucked her, I could feel his cum smear on my cock and the front of my crotch. Sloppy seconds are fun but there was little friction and I worked myself into a sweat fucking and watching her suck his cock. She was really excited and loose so when I slipped out I repositioned my cock and it brushed her ass hole. She wiggled like crazy and pushed down on my cock with her hole.

Smearing goo from her cunt on my cock I went back to pushing against her asshole. It took no time at all for my cockhead to slide inside of her. Now she was tight! She seemed happy and I expect she had been fucked in the ass many times before but she pushed wiggled and sucked like crazy.

Suddenly we all realized we were feeding the bugs and we settled in the truck and headed back to town. None of us really wanted to go anywhere else, we seemed to be pretty fucked out looking.

D and I were with Helen a few more times, but that was long ago and a may be told in a future story.

I hope you enjoyed this story, I alway enjoy emails or comments.