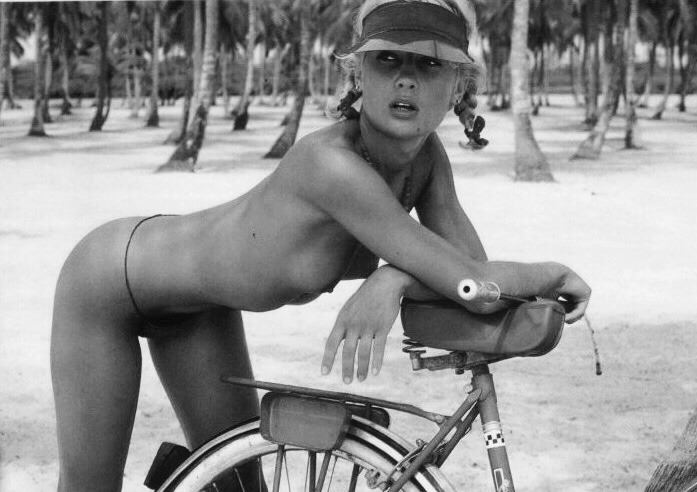 I was sitting around the house getting drunk and horny one night, right after divorcing my second wife. My girlfriend was in jail, and that's how it was at that time. It could have been worse. It could have been me in jail. But anyway, the phone rang, usually it would be a telemarketer, but this time I got lucky. It was Laurie, who I knew from the bar that I frequented. "Heh, Jeff, this is Laurie. I've got a big favor to ask. I don't have anywhere to live, can I come over and stay with you. I'll clean your house and everything. I'll cook too, you won't have to do a thing. I know you've just got one bedroom so I'll sleep in the den." Well, she had it all figured out, I just wasn't too sure about the part about sleeping in the den. I knew where she was going to sleep and I'll bet she did too. I told her sure, come on over.

Laurie had shown up from out of nowhere. She had left her home and family up north and come down South to try her luck. She probably got run off from home, but who knows? She seemed like a nice girl in a way, but she was also sort of a sorry whore too. I felt she was fuckin' her way around just to have a place to stay. Everybody does something for a living.

After about a half hour, Laurie's $100 car pulled up in the driveway. She pulled her luggage out of the back seat: one garbage bag filled full of clothes. She dragged her bag into the house and announced "I'm here!" We sat around, drank some beer, that's one thing she was good at. We watched TV and got shit-faced. I got a chance to take a good look at her. She had been good-looking at one time. She had a nice ass, a set of whoppers for tits. She wasn't fat, just getting a little big around the middle. Her neat trim ass gave away the fact that she must have had a killer body at one time, before she let herself go, and of course she still had those big 42D tits.
She had long brown hair and a nice creamy skin tone, further evidence that this had been somebody's prize baby doll at one time. One of these days I'll write a fantasy about getting her cherry at the age of l6. But this is a true story, and her cherry is long gone on this night along with a lot of water under the bridge. We didn't stay up too late because she was tired from not getting any sleep for a couple of days; she had been hanging out in a couple of bars that allowed you to stay all night after closing. We both stripped down to almost nothing and got into my double bed. She never mentioned sleeping in the den again.

The next morning, we both awoke at the unreasonable hour of 5:30AM. I had slept with this woman and hadn't even had sex yet. It didn't take long to change that. I reached over and fondled one of those big knockers, I found the other one with no problem. Nobody had to tell her what to do. She leaned up in bed and pulled that t-shirt I loaned her off and threw it on the floor. Her panties soon followed. We rolled up together and made love like newlyweds. She was an enthusiastic lover and a good kisser. One little tug on her arm and she rolled over on top of me and found my hard dick and sucked it to full size in a matter of minutes. Then I pushed on her shoulders a little and she slid up into position and guided my throbbing cock past the soft brown hairs covering her pussy. She slid down onto the entire length easily. She was juicy, warm, not tight, but she was no virgin. Her pussy had a good grip on my cock and she rode me aggressively. I got the thrill of fondling her bouncing tits that kind of swayed back and forth and slapped together seductively as she fucked me good and hard. All the sudden, Laurie slammed down on my cock and then started jerking her hips hard and squealing I like it when they come first, then I feel I can take over. I rolled her over on her back, threw her legs up in the air and fucked her even harder than she fucked me. My balls were slapping her ass as my cock bottomed out in her pussy on each hard stroke. I didn't even try to hold back, I just let the pressure build and then released a full load of cum saved up from a whole week or more of no sex into this living fuck doll. After it was over, Laurie got up and went into the bathroom to clean up. "Damn, that must have been a load, I feel it running down my leg."

That was typical of our lovemaking sessions. We never got serious about each other but we fucked hard and often. She stayed about 90 days, until just before my girlfriend was to get out of jail. One Christmas Day, we had nothing to do so we fucked four different times throughout the day. She never turned me down for sex but once. She explained that she had started her period. I said, "So what, Baby, a little blood doesn't scare me." With that, she pealed her pants off and we went at it. I'm always reminded of it when I change my sheets and see that little spot of blood on the mattress that soaked through the sheets.

She stayed all that time, she didn't borrow any money, and she didn't steal anything when she left except an old suitcase she found in the closet. It was a small price to pay for about 100 sex sessions. I don't know if you've bought any sex lately, but about $100 a throw is about the best you'll do.

And to think she left broke, just like she came.