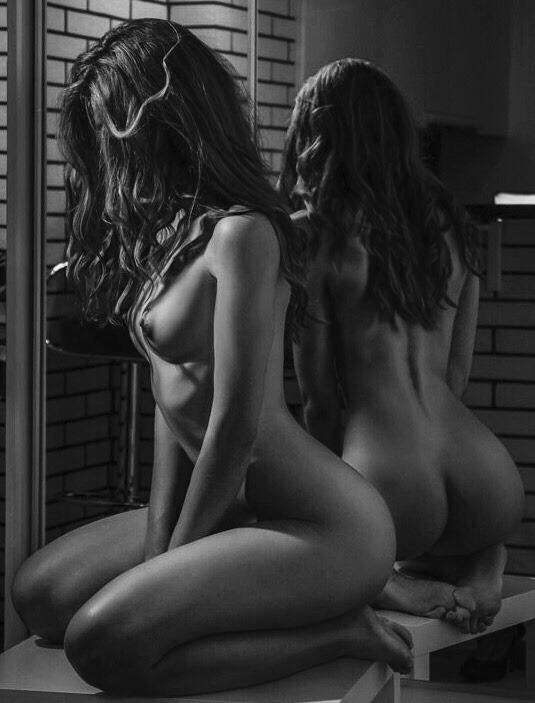 She closed her eyes and felt him. His arms around her bare shoulders. His lean hard body pressed hard against hers. He had a gently way of making love… taking his time… cool and relaxed. He allowed the feeling build… gradually until it was more. He had long fingers that he knew instinctively how to stroke. He stroked her eyes, pulling her face to his and kissing her closed eyes. That was the one thing she really enjoyed how he kissed her… how he stroked her.

She turned over meeting his embrace. She felt the wetness between her legs and could feel his long shapely fingers playing with her pink hot lips. She groaned with pleasure. She moved her hand to his hard dick and held it. She enjoyed just holding it and then slowly pumping it. She moved her face away from his and bowed her head. She pulled his cock into her mouth and gently started sucking.

His hands were covered with oil and he molded her breasts. His long fingers were gentle as they moved and massaged the oil deep into her sensitive skin. Her own hands found his… and she gently twisted his nipples between her fingers. Again she lowered her head, but this time she touched her tongue on the tip of his nipple. She started sucking as she twisted the nipple between her fingers.

He laid his head back feeling the pleasure of her fingers and her tongue. A tingle rippled through his body and coursed through his veins. It was the heat of passion… of love making. He pulled his body on top of hers and she held him tight, as he penetrated deep between her wet lips. He held his cock inside her… enjoying the tight warmth that only pussy could give.

And then slowly, deliberately he started to move… deep inside her… like a well oiled piston… he pumped. She spread her legs wide and pulled her legs up, allowing his cock to bury itself deeper inside. She could feel his tip hitting her special place… that special place that all women have. The tingle started and it was growing. With each new thrust it built. She moved her body closer and pulled his head down to her mouth.

She found his mouth and buried her tongue into his. It was war for a moment and then he won… his tongue was in her mouth and her tongue was curled underneath enjoying his taste… his warmth. She wanted to give this man everything… opening herself to feel all that she could feel and encouraging him to do the same. She wanted so much to be a part of him… melting into him and he melting into her. The heat was rising and she felt his beating balls… begging to be part of the game. His hardness was buried deep into her valley and then she felt it… a stirring and then more… she felt her walls starting to throb simultaneously feeling his hardness starting to swell. The first jets of hotness filled her… and then he opened his mouth and his own orgasmic words started mingling with hers. They both held each other closer… feeling the warmth that first spilled from him in his seed… and she, the wetness of her world the soil… absorbing his wetness.. his warmth… his wetness.

She was filled with him and his warmness… Her body shuddered and spasmed with an orgasm… and then she woke. She was holding a pillow close to her… her arms were wrapped around the softness as she held it close to her breasts.

The moment was too much for her… she closed her eyes, wanting to regain the memory of him… the man she loved so very much. They man she was willing to call master and answer as his sub whore… the man she willingly agreed to have a 3 some with… first with another man and then with another women…

The man who had come to her… and she had embraced. But he was not there.. by his own choosing… he had sent her an e-mail a day after her birthday stating how he felt smothered… how he felt choked. A letter saying goodbye. She had desperately tried to understand… understand all those moments when he commanded her to say she was his… and that she loved him. She did love him… she loved him unlike any other man… with such warmth in her heart and such yearning… she was unable to think of anyone else.

She felt lost… and was trying to keep herself very busy. But at night… when she closed her eyes… his memory followed her to her bed… and she was unable and unwilling to keep him at bay… he found her each time… and held her close… reliving over and over their tender love making… and the promise that she would always love him…

She laid there for another moment… allowing the tears of her loss cascade down her cheeks. She closed her eyes… and he was there again… in her arms… His mouth kissing hers and she eagerly returning his kisses…

Her last remaining thought was her shattered heart… and how she lingered in her own hell of despair!