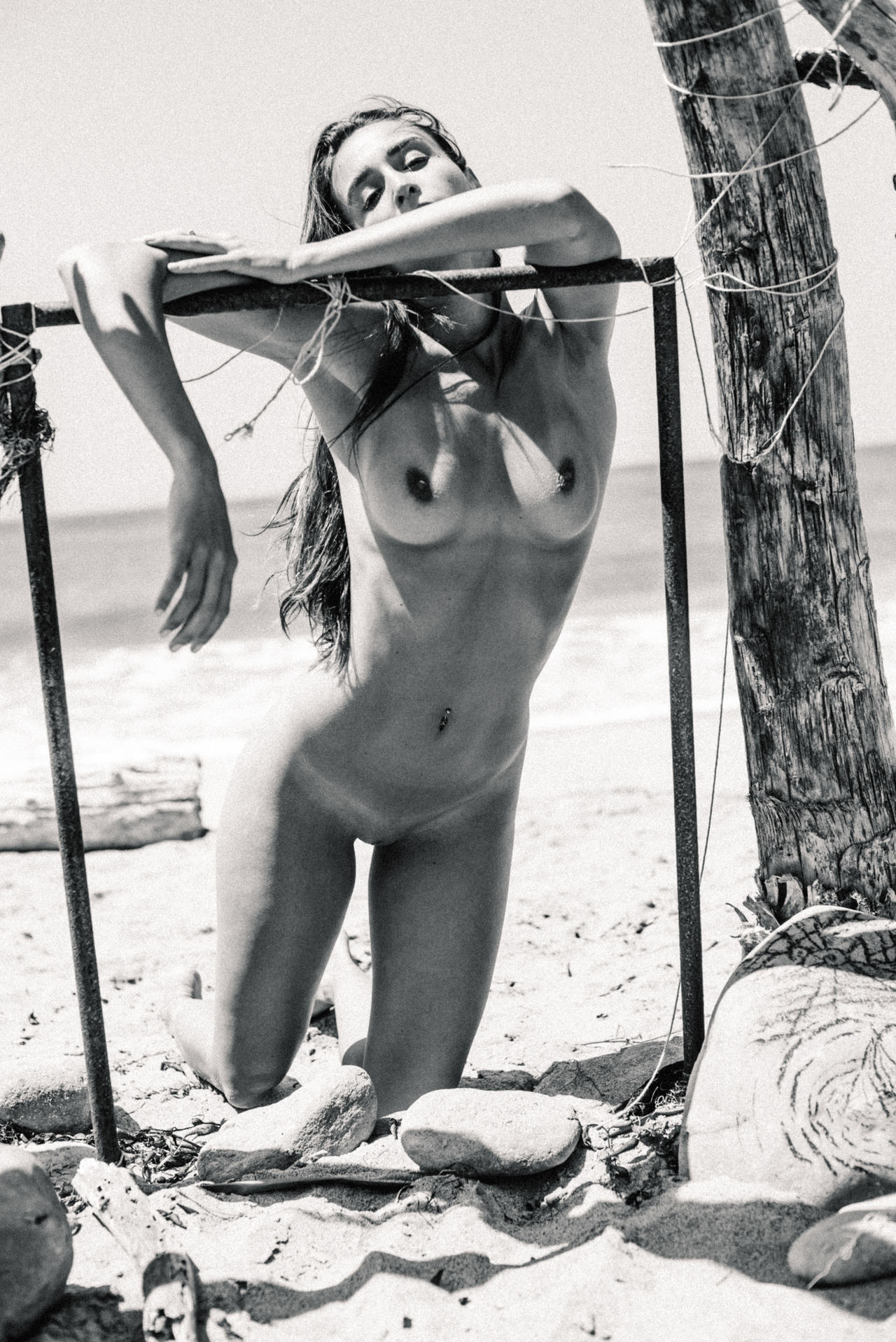 It was the Friday afternoon, before the Holiday Weekend, and I was driving the car to the ‘Biker Rally’ and ‘Rock Festival’, when I realized that I had a ‘slow puncture’. My husband, Craig, had set off earlier, on his new Honda 750.

My mobile phone couldn’t receive a signal, so all I could do was sit by the side of the road; smoke a cigarette and wait for help.
After 20 minutes, I heard a familiar noise, in the distance.

In seconds, seven Harleys cruised around the leafy bend. Seeing my distress, the bikes pulled up next to me.
“Need a hand?” he drawled, as he pushed his goggles up, onto his helmet.
They were a group of Desperadoes. Craig had said that they might attend this year, as one of their favorite bands was playing on the Saturday night. We’d seen them a couple of years previously, at a different rally, when they had ransacked a beer tent, and beat up some security guards.
“Em,” I stuttered, “I’ve got a flat, and can’t get the nuts off.”

He took his helmet off, and shook his hair. Looking straight at me with his piercing blue eyes, he drawled, “Let me have a look.”
As he began working on the wheel, his friends wandered around, stretching their legs and adjusting the bags on the back of their bikes.
He was about 50, over 6ft. and dressed in scruffy, denim and leather. His denim jacket was covered in badges, with a huge skull, in the centre. He had long shaggy, greying hair, which matched a big, fluffy Van Dyke beard. When he took off his jacket, his arms were covered in intricate tattoos, and when his hair moved, I could see six or seven rings in each ear.

A tall, fat, bald man asked, as he offered his cigarettes. I was shaking as he lit my cigarette. “I’m sorry, it’s just that…. You shit! I’m sorry!” I was flustered and frightened.

As I said this, two of the gang were standing beside my car, pissing into the bushes. As they shook them dry, I realized that I was staring at their cocks. One of them was massive, and appeared to have a tattoo on it. Catching my eye, he waved it in my direction, and laughed out loud. “Do you want a better look at The Snake?” He roared. I quickly turned away. I was feeling very vulnerable, as this gang of hard nuts surrounded me.

“Are you going to the festival?” The first guy asked, as he finished tightening the wheel nuts, on the spare.
“Yes. We go every year.” I continued, “My husband has gone ahead, on his bike. I’m taking the food and camping things.”
“Lucky guy.” He said, as he wiped his hands on his jeans, staring at my large breasts, “What bike has he got?” he asked. I grinned, “A red one!” He smiled as he raised his eyebrows. “That tyre will get you there, but you’ll need to replace it pretty soon.”

“What do I owe you?” I asked. “Buy me a beer when you get to the Festival.” He said as he got back onto his bike. With a wave, they roared off, down the road.
When I drove onto the field, Craig was already there, drinking beer with friends of ours. They were amazed when I recounted my story. As they had been drinking for a couple of hours, they began making up stories about me being a real ‘biker babe’, and what my initiation ceremony had been.
We set our tent up, watched a couple of bands and drank late into the night, around the campfire. As the night went on, Craig became more and more excited about my brush with the Desperadoes.

The following day was very hot and sunny, so I chose to wear my denim shorts with a bikini top.
We met loads of friends, as the campsite filled up. Craig regaled everyone with my story.

In the middle of the afternoon, as Craig and his pals looked at the bike display, I wandered down to the stage, with my friend Polly, who was wearing tight jeans and a white vest. As we stood around, Polly nudged me, “Are these your new friends?” A group of Desperadoes were pushing their way through the small crowd.
“Hey! Tyre lady!” The one called shouted as he recognized me. I could have died with embarrassment, as people turned to see who he was shouting at. “Look! It’s the tyre lady!” He barged his way towards me. “Sexy tyre lady!” he whistled, as he stared at my (34d) breasts, which were just say staying in my red bikini top. He threw his arms around me, and forcibly kissed me on the lips. Shocked, all I could think of was the taste of stale beer and cigarettes on his tongue, as it poked into my mouth. “I’m Polly!” Polly announced. Snake grabbed her by the waist and kissed her, full on the lips, too. Polly threw her arms around him, and matched his kiss. “Hello! Polly!” The biker laughed.

With his arm around me waist, and his thumb in my waistband, he was squeezing my bum cheek, as he introduced us to the other gang members, Egg, Popeye, JJ, Fat Bob, Woody and Bubble. He made Polly laugh, and me blush when he told them that I had stared at his cock, when he had took a piss. “She only saw it when it was a Grass snake – wait until she sees it when it’s a Spitting Cobra!” He looked at me, as he chuckled, making his friends roar. “Come on, let’s go and see Crow, you owe him a beer.”

Polly and I loved the attention we received as we walked through the crowd, with Snakes arms curled around our waists, and occasionally grabbing a handful of soft tit.

“Crow! Look what I’ve found! The Tyre Lady and a friend!” Snake shouted when we approached the Desperadoes campsite.
“Hi!” and like Snake before him, he greeted me with a full kiss on the lips. Polly was amazed as I willingly returned the kiss, pressing my face into his beard. My fear the previous day had subsided, and the churning feeling, in my stomach, was now mixed with excitement.
Their campsite was a mess, with bikes and vans parked at random. Beer cans and bottles were littered everywhere.

“Do you want a beer?” Crow asked, as he handed us a couple of bottles. I sat on the grass, next to his bike, and chatted. Crow asked what Craig had said, about him changing the flat tyre. When I told him, that Craig wanted to meet him, he invited us over, for a party, when the bands finished, that night. As I got up to leave, I looked around for Polly, but couldn’t see her. “Polly, we’ve got to go!” I shouted. A van door opened, and Polly climbed out, looking disheveled, fastening the fly buttons on her jeans, followed by Snake. she sighed, with a big grin on her face.

“Polly! You dirty cow!” I laughed, “What will Nicky say?” Grabbing my arm, she whispered, conspiratorially “What he doesn’t know, won’t hurt him. Will it?” “Anyway, it was only a wank, and a bit of />
We walked back to our husbands rocking with laughter, as she described wanking Snakes, huge tattooed, cock.
Craig and Nicky were very excited when I told them that we had been invited to the Desperadoes party.
Knowing that we were going to the party afterwards, I wore a pair of boots, short leather skirt and a leather waistcoat. Polly wore her leather trousers with a velvet shirt.

The bands were excellent, and the place really rocked. Polly and I danced like crazy, and the guys kept us supplied with beer and JD. By 11 o’clock I was quite drunk.

“Tyre Lady! Polly!” Snake greeted us with his customary ‘full on’ kisses, which lasted over a minute, each. I threw my arms around his shoulders and ground my crotch into his. His hands were all over my arse. “Do you still want to come over for a party?” He asked. I looked at our husbands, who nodded agreement. “Let the party commence!” He shouted, as he put his arms around our waists, and led the way to their campsite. Craig and Nicky meekly followed like puppy dogs.
As we walked, Snake slipped his hand up the front of my waistcoat, and tickled my fleshy tit. When I didn’t complain, he let out an almighty howl. His fingers were now, playing with my erect nipple, I was so drunk I didn’t care that my husband was only three paces behind. “That feels good!” I whispered, kissing him on his dirty cheek. He then turned his attention to Polly, who seemed just as game as I was.