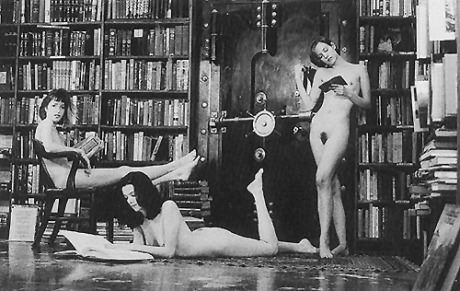 Kat, Gina, Stacy and I lounged on the couch a bit, taking polite sips from a bottle of wine, smoking, talking, and recuperating from round one.
“You three seem rather familiar with each other, do you do this often?” I asked gesturing to the pushed together sectional couch and the four of us naked.
“This is the first time with a guy.” Gina said.
“Normally it’s just the three of us.” Stacey added.
“And our toys,” Kat stated, “Stacey has an awesome /> “It’s not that great,” stated Stacy, “You just made it sound like I’ve got the mechanical stuff on that web site.”
Gina giggled, “Only because of how much it costs. You’ve flat stated you want a few of those.”
Stacy smiled, “Only a couple.”
I decided to keep my mouth shut for now, but I figured the information would come in handy later. After I played with a few things here and there and figured out how it all worked.
Gina was still lying in the center and started playing with herself.
“So are you the least bit worried?” Stacy asked
“About what?” I said smiling to cover the sudden ‘uh oh’ in my head.
“You just filled Kat full of nice thick rich cum. Are you worried she might get pregnant?” Kat asked.
I laughed. I stated confidently, “I have been found to be /> Kat grinned. “Good. I like being filled, but don’t like the idea of pregnancy right now.”
I leaned down moved Gina’s hands and started licking her lips and clit. I could almost hear the announcer say ‘round two’ and the bell ringing.
Kat crawled over and straddled her face and then was helping me lick. I decided that was a good time for one of my tricks. As my tongue started to slide inside Gina’s drenched pussy Stacy wrapped her lips around the head of my dick and slurped it into her mouth like it was spaghetti. That caused me to pause for a second, but only for a second. I started sliding my tongue in and out of Gina. Literally tongue fucking her. With Kat dancing her tongue all over Gina’s clit and lips and me tongue fucking her it wasn’t long before Gina was starting an orgasm. When I felt her young pussy starting to cum, I pressed my nice 4 inch tongue up and started licking her G spot.
“Oh Goddess Bless! He’s Licking My Spot! Oh Fuck Yes! Oh I Love Your Long Tongue! Fuck Me With Your Tongue While I /> Kat pressed her cunt onto Gina’s mouth and muffled the scream. Grinning at me wickedly as she did. “Show me.” She said.
I pulled my tongue out of the cuming cutie, and touched the top of the tip of my nose with the tip of my tongue.
“Sweet! Another point in your favor.” She said and went back to work on Gina’s clit.
I had to have pussy on my dick again. It’s what happens with me when I get a blowjob; even as good as the ones that Stacy was giving me. I maneuvered around and slipped my dick out of Stacy’s mouth, then moved up and slid my dick into Gina’s wet cunt. She all but screamed her moan into Kats pussy.
Stacy slid up and started licking and sucking my balls, then I felt an odd pressure and Gina’s pussy got tighter. She all but screamed again into Kat’s pussy.
I felt Stacy’s fingers through the thin membrane between pussy and ass.
“How many Stacy?” I asked.
She stopped sucking and licking long enough to say. “Three like always.” Then went back to her oral attention of my balls.
I looked around a bit, as I continued to fuck Gina. Gina had at least two fingers from each hand inside Kat and was licking and sucking Kat for all she was worth.
Stacy was playing with herself with at least 4 fingers, had 3 in Gina’s ass, and was going for broke on my nuts with her mouth. Kat was lapping at Gina’s clit and lips and was massaging the hell out one of Gina’s tits, and one of her own.
I liked that thought and snaked my hands in and grabbed hold of the two free breasts. Both girls moaned their appreciation. Gina came several times, I wasn’t surprised I was banging her pretty heavy and Stacy was going like a machine with the three fingers in her ass. Not to mention the feeling of Kat’s lips and tongue on her lips and clit.
Kat suddenly sat up, “When you cum, bite her /> I heard a mumbled and muffled, “Oh Gods Please YES.”
Kat helped me position her tits and a short bit later, as I sprayed my seed into her, I bit Gina’s nipples like I had Kat’s neck, a fang and a molar each. As I did she came harder that she had any previous time, pressing her pussy onto my dick and arching her tits into the bite. The strength of it literally caused her to stop breathing and be speechless.
After I caught my breath, they had me move around and straddle Gina’s face so she could suck me clean as Kat and Stacy lapped at my cum spilling from her pussy.
After a bit we all moved apart and lit cigarettes, started passing the last of the third bottle of wine and recuperated a bit again.
I looked at the wall clock and chuckled lightly. Knowing I should be going to bed for sleep, but also knowing I was in bed with these three lovely, sexy, kinky, horny young women.
Tonight was turning out to be so much fun that I’d still be grinning tomorrow.