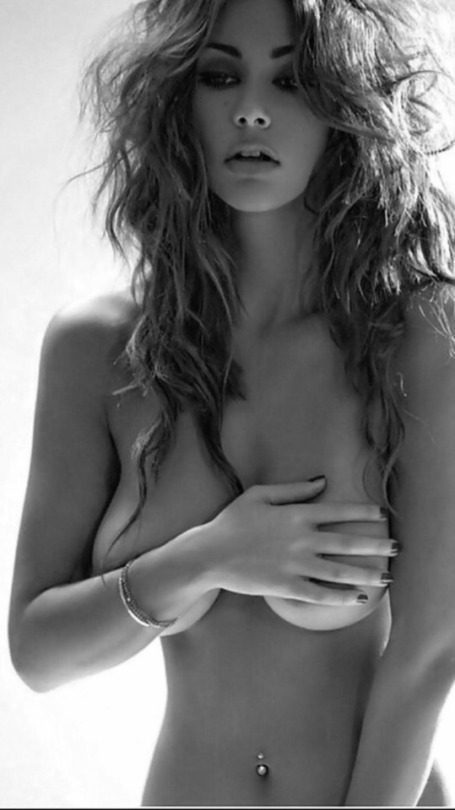 Lynn swayed over to Jack and held her hands out to him. As Jack stood up Lynn wrapped her arms around his neck and Jack put his hands on either side of her waist down low by her hips. They moved to the rhythm of the music and Alan could tell that Lynn was trying to move her body in a way that he would find sexy. At least he thought it was so he would find it sexy, but then he thought maybe it was so Jack would find it sexy. After a few minutes Alan noticed Lynn’s eyes closing and her head moving back in a kind of dreamy way. It didn’t take long after that for Lynn to move in close to Jack and start to grind her pussy against his crotch.

Watching Lynn and Jack, Alan could feel his cock starting to harden in his pants and he came up behind her, placed his hands on her waist and kissed the back of her neck. As he did he whispered in her ear, “Kiss him.”

Lynn pulled Jack’s head toward her and opening her mouth kissed him deeply tasting his hot sweet breath. Alan moved his hands up to her shoulders and rubbed her as he kissed behind her ears. Alan’s hands moved up and down Lynn’s back rubbing first her shoulders and then moving down to her hips and butt. Gently he moved his hands around her waist trying not to tickle her. He grabbed her shirt and pulled up moving his hands around to the back until he had pulled her shirt free from her shorts.

Noises of pleasure came from Lynn as Alan’s hands moved up inside her shirt and he rubbed the skin of her back and shoulders. His hands slid around her sides and up to enclose her breast in his strong hands. As he pressed her breasts and kissed the back of her neck he felt Jack’s hand come up to Lynn’s left breast and he moved his away. Continuing to kiss her neck and shoulders he started at the bottom of her shirt and undid the buttons. When the top button came undone he pulled back on her shirt moving it off her shoulders. Lynn let go of Jack’s neck and Alan pulled her shirt free of her arms.

Lynn put her arms back around Jack’s neck and shoulders as Alan undid the clasp of her bras. She felt her breasts fall free and then gasped as Jack’s right hand moved up to her left breast and Alan’s right hand move up to her right breast. She gasped again as she thought about the two hands of different men caressing her and the two sets of lips stimulating her.

Alan moved both hands up to grab Lynn’s breasts and as he did he pressed hard against her back. She could feel his hardness as he pressed into her back and at the same time she was pressed against Jack feeling his cock. Alan’s pressure against her slackened and his hands moved down to her waist where he undid the button of her shorts and then slid the zipper down. She felt his mouth move down her back as he lowered her shorts. He pushed against her left leg and she lifted it. He removed both her shoe and the shorts. She lifted her right leg and he removed her other shoe and took off her shorts completely. Still on his knees he slid his thumbs inside the waistband of her panties and slowly slid them down kissing her ass as the panties came down.

Again she lifted her left leg and Alan slid the panties over her foot. She lifted her right leg and he did the same. Lynn was now naked, her hands around Jack’s neck and his hands on her breast as they kissed. Alan was on his knees behind her, his hands exploring her legs and ass. Lynn felt incredibly sexy, naked with two handsome men touching her body trying to pleasure her.

When Lynn put her foot on the floor she made sure that her legs were spread. Jack’s tongue was probing deep inside her mouth while his hands caressed her breasts. Alan’s hands moved up Lynn’s legs and massaged her ass and then moved back down again while he continued to kiss her ass and her hips. He took her left leg in both hands with his right hand in between her legs. He kissed her ass and kissed around to her left hip as his hands moved slowly up her leg. She gasped sucking in some of Jack’s breath as Alan’s hand touched between her lips.

Alan slid his finger into her marveling at how wet she was. He slid a second finger in and spread her lubrication around her lips and sliding his fingers forward toward her clit. With one finger on either side of her clit he slid them back and forth at the same time that Jack took her nipple in his mouth. She moaned and bucked her hips in response to the stimulation of Alan’s fingers. Alan worked his fingers back and forth moving back to slide inside her and back out again to spread the juices on her swollen lips and up to her clitoris. She was as wet as he could ever remember her being and she moved her hips back and forth while she bit her lip and grunted. She ran her right hand over Jack’s head and pulled him to her breast. She’d never felt so stimulated before with four hands caressing her and two hot mouths on her.

While Alan worked her lips and clitoris and Jack sucked on her nipples she pulled Jack’s shirt out of his jeans and over his head. She threw his shirt across the room and frantically clawed at his belt. As she tried to undo his pants and still concentrate on the feelings she wished that his clothes would just magically fly off. She managed to get his pants undone and pulled part way down and he quickly stepped back and slipped off both boots and then stripped his pants off. Alan’s fingers were still working their magic on her while she hungrily watched Jack free his large cock. She looked at his stiff cock smiling knowing that she would soon feel his cock inside her.

Jack threw off his pants as Alan laid Lynn on the king size bed. Jack laid down nest to Lynn kissing her hard on the mouth. Alan now was licking her clit as she moaned with pleasure. Suddenly that feeling started to build and Lynn exploded with the most intense orgasm she had ever experienced. Alan moved to take Jack?s place feeling their tongues touch as he kissed her passionately. As they were kissing, Lynn reached out and grabbed Jack?s cock pulling on it and directing it between her legs. Lynn spread her legs further and directed Jack’s cock to her slick pussy lips. Jack’s first tasted her very wet pussy then rubbed his cock back and forth over her clit then slipped into her. Her eyes went wide and she gasped. Lynn wrapped her legs strongly around Jack’s middle as he slid in and out of her. Then Alan was there beside her naked with his cock bouncing by her head. She opened her mouth and Alan directed his cock to her lips.

Lynn bounced up and down on the bed as Jack drove his cock deep in and out of her. She couldn’t hold Alan’s cock in her mouth and he pulled away. Then his face came up to hers and he kissed her hard on the mouth pushing his tongue deep into her mouth while his hand grabbed her breasts and squeezed.

Her eyes went wide as Alan moved to her ear and said in a deep throaty voice, “God Lynn. I love you. You are so fucking hot and sexy.”

And then his mouth quickly moved to her chest and sucked in her nipple while Jack groaned loudly and drove hard into her and went completely rigid. Lynn pulled with her legs and squeezed hard with her cunt trying to pull Jack as far into her as she could while he shot several loads of come into her. Lynn could feel the come sliding down between her ass cheeks onto the bed as Jack collapsed to the side with a moan.

Lynn liked the feeling of his cock inside her as it softened. Alan’s hand was between her legs before she knew it. Alan got in between her legs and after first tasting her wetness he quickly pushed his cock into her. She was so wet that his cock slipped in easily. He dived forward as he groaned and grunted. She couldn’t believe how passionate he was as he pumped in and out Suddenly he buried his face in the corner of her neck, his body went rigid and he grunted as his hard cock pulsed and shot his cum inside and added it to Jacks that was already there.

Lynn lay with Alan between her legs, his cock in her pussy and Jack?s head on her chest. She lay with her arms around him and with her cunt muscles squeezed Alan?s cock as hard as she could. As she lay there she could feel a puddle of Alan and Jack’s come mixed with her juices forming on the bed beneath her ass. With her left hand she found Jack?s cock excited and hard again. As she felt how wet she was she thought to herself that this was the best sex she’d ever had and they still had the entire night to be together as she smiled happily knowing they would rest for a while before they all were rested enough to begin enjoying each others bodies and the attention Alan and Jack would give her.

Who would you like to be, Lynn, Alan or Jack??