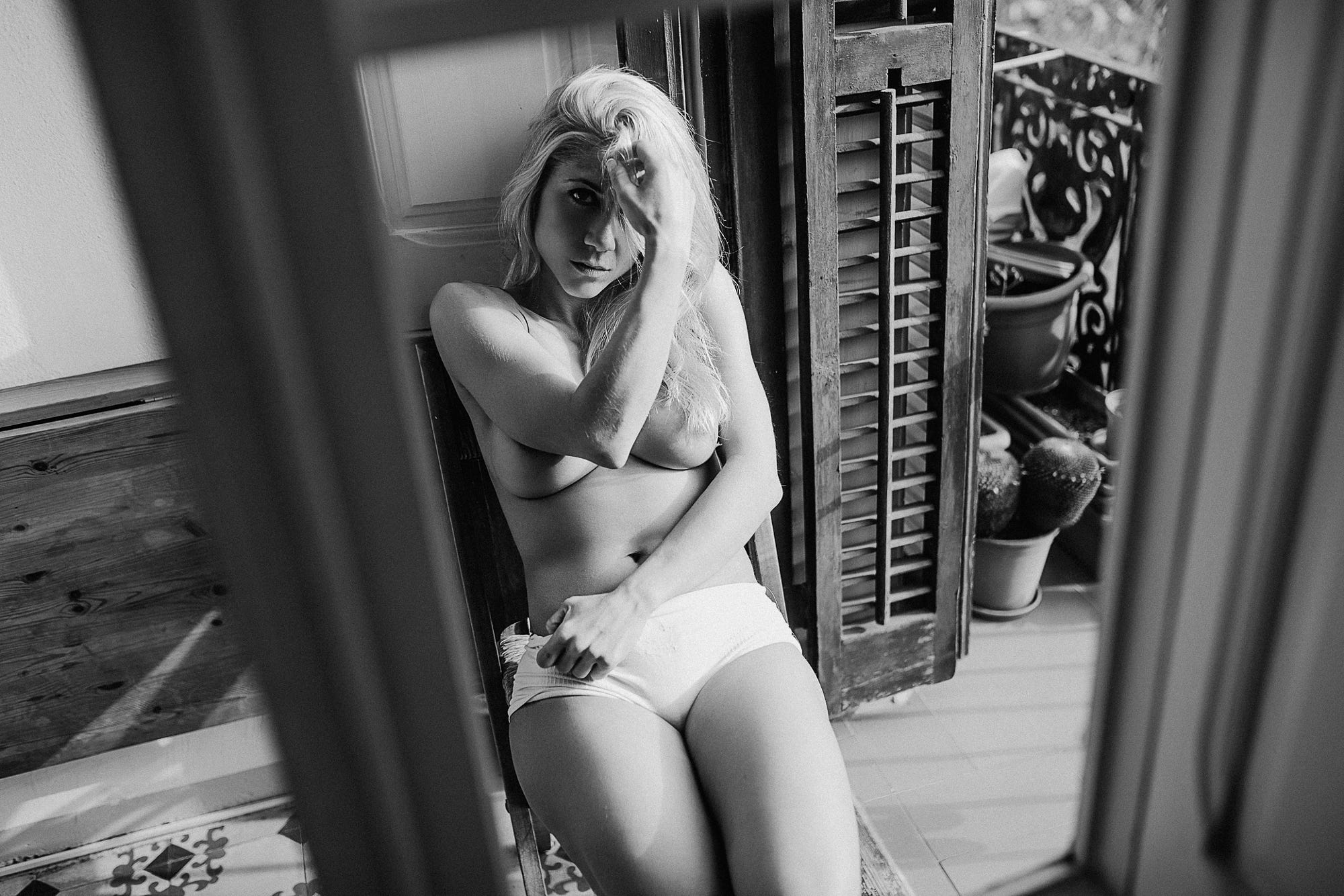 I was in Sydney visiting my daughter and it was coming up to my birthday so it was decided that we would have a bit of a celebration and invite some people over.
It was a good night and as the party eventually slowed down, people drifted away until there was just my daughter myself and Riann (her ex) left. Riann and her had moved in together as friends so they had separated bedrooms. I was sleeping in with her
My daughter mentioned that she was tired and said she was heading off to bed, so Riann said he would stay a bit longer to help me clean up the mess. I said there was no need but he insisted which was good as he was always a very lazy person.

I had dressed up a bit for the party so I went into the bedroom and changed into my sarong and a tee shirt so I wouldn’t get my dress dirty.
I said to Riann just to bring me all the dirty dishes and glasses to me and I would wash them up and we would be done in no time at all.
It was going smoothly enough even though he was slow at doing everything. We chatted away as we progressed through the mess.
Riann was complementing me on how lovely I looked tonight which I found a bit weird but I thanked him non the less, and said how much I appreciated him staying back to help me.
We took a break and Riann lit up a joint and offered me some. I thought what the hell, so we stood there for 10 minutes chatting and smoking this weed.
Eventually got onto the topic of my daughter and him breaking up and how I would have liked a rainbow baby had they stayed together (Riann was of South African Indian descent)
He laughed and said it was his fault and his loss. He then said how gorgeous she was and could see where she got her looks from. I blushed for a moment, then thanked him before finishing the joint and getting back to the cleaning up.

As I was washing the dishes, he was now coming up behind me and reaching past to place the glasses on the counter. As he did this I could feel his breath on my neck and his arm brush my breast as he reached through.
I didn’t think anything of it and kept washing up, but the next trip he made, he did it again but this time he pushed into me a little bit more and I felt his cock against me through his jeans. Now I don’t know if it was the joint we had shared or what, but my nipples started to stiffen and my pussy started to moisten. I was now starting to get inexplicably wet.
I felt flustered and confused because here I was, a 52 yr. old married woman becoming sexually aroused with the 34yr old ex-boyfriend of my daughter. Now I don’t find Riann remotely attractive, yet he wasn’t unattractive and here I was with my brain telling me one thing and my body reacting totally the opposite.

I left the sink to compose myself and to get a bowl off the coffee table. He trailed behind me, and as I bent down to pick up the bowl, he placed his hand on my ass and leaned past me to take it from me. “Its ok Paulene, I’ve got it” he said.
I turned away from him and he followed me back to the kitchen handing me the bowl to be washed.
As I started cleaning it, he moved behind me and started to rub my shoulders. I shrugged him away, but he just said “chill out Paulene you feel so tense, your daughter showed me this, it will relax you” he said.

So there I was standing at the sink, washing a bowl with my daughters ex boyfriend standing behind me rubbing my shoulders. My brain was telling me to stop, but he was right, it was relaxing. I stopped washing up and just stood there letting him massage away.
It was a subconscious thing, but I became so relaxed I found myself leaning forward towards the sink. He leant into me more and it was then that I felt his hardness against the thin material of my sarong. I froze.
He started to move one hand down my back until he reached my ass and then started gently squeezing and rubbing it.
I knew what he was doing but I stood there frozen with what was happening yet so relaxed.
Riann massaged me like this, changing shoulders and working up and down my back like a pro.
He put his foot between my legs and separated my feet and it was then that I felt his cock push against my ass cheeks again. I didn’t turn around, I just kept my head low and said nothing. I should have said something then and there but I didn’t and I don’t know why.

He then began pulling my sarong up and I instantly stopped him, but he did it again, and then again, and so again I stopped him but each time he was more persistent, eventually pulling it from my grip . He raised it over my ass exposing my knickers. I started to turn around and hissed at him ‘what are you doing Riann’, but he turned me back to face the sink again.
My heart was now racing and my nipples were now completely hard, but what was more concerning was that my pussy was swollen and wet. My body was uncontrollably preparing me to fuck and I had no control over it.

I heard his jeans drop to the floor behind me then he started running his shaft up and down between my cheeks. I could feel his skin against mine and the shape and warmth of his exposed cock as he rubbed it between my legs and against my pussy. The thin material of my of my knickers providing me little protection.
He held me forward with one hand, then with the other, pulled my knickers to one side.
He paused for a second then I felt the head of his cock against my wet entrance.
Riann took hold of my hips then pushed inside me. I inhaled sharply as he penetrated my soaked hole… Fuuck” I moaned as he slid deeper me. “No stop” I weakly protested, but it was too late. His hands changed from massaging me to gripping my hips firmly as he started to fuck me.
“I’ve fanticised about fucking you for years” he whispered, so hot” he grunted from behind me.

His talking was turning me on but I didn’t look back, instead, I just kept both hands on the bench steadying myself while he rammed into me from behind. His breathing quickly got heavier and then he grunted loudly and I felt his cock pulse as he shot his hot seed inside me.
I instantly stood bolt upright forcing his cock out of me and quickly dropped my sarong back in place.
I spun around and slapped him hard on his face and stood there glaring intensely at him while his cum ran down the inside of my leg. Seconds seemed like hours while we just stared at each other.
I pulled my knickers back in place and Riann just silently looked back at me.
I must have looked pissed off.
He had a complete look of horror on his face as he had no idea of what I would say or do next.

leave those there” I said, pointing at his jeans as I grabbed his arm and pulled him down the hallway. Once in his room I closed the door.
There was a dim lamp on in the corner and he was standing there half naked.

“What the fuck just happened then Riann” I hissed, “I’m her Mum for god’s sake” I said pointing to the room over the hallway
“I don’t know Paulene” he muttered, “I just couldn’t stop myself, I’m sorry” he replied, “I’m so sorry, it must have been the weed”.

“No one can know about this” I said to him. “Do you understand me” I growled.
He nodded in back. “So what happens now he whispered”, as a huge look of dread washed over his face.

I sat down on his bed.
“I don’t know Riann, I just don’t know at the moment”.
I looked down at the floor for a minute then turned my gaze back to him.

said pausing …. It is your room after all…what do you think we should do about this?”
He wasn’t sure and he just stood there motionless as I stared up at him…
He was naked from the waist down and I could see his cock was still coated with my wetness.

I don’t think he believed his ears but he quickly stepped forward and I raised my hips allowing him to effortlessly pull them from me.
He then stood upright and took off his remaining clothes, throwing them in a heap beside the bed.
I lay back flat on the bed and he pushed my legs apart and went straight down on me.

He took his weight on his hands and started fucking me deep and hard and I soon started to feel my orgasm rising. I reached between my legs and began rubbing my clit and bringing myself closer and closer to orgasm.
For such a lazy man, Riann was turning into a great fuck. His thrusts were rhythmic, strong and deep and every so often he would crush his pubic mound against mine, sending even more waves of pleasure through me.
I was so close to orgasm now…so very, very close.

He thrust into me harder and faster and with no signs of cumming either. I hadn’t ever been fucked like this and it felt so good.
I looked down and watched his dark glistening cock disappear in and out of me, and found it turned me on even more. I rubbed myself in unison with his thrusts as he started to build my orgasm very quickly. His cock was a perfect fit and filled every inch of me.
Then suddenly it of nowhere my body released its coiled sexual tension as it exploded through my brain and body. My body arched up and stiffened as if I’d been electrocuted, then it dropped me back on the bed while it washed through me like a tsunami, flooding and electrifying every nerve and sense while it pulsed its way around my body.

We lay there for about 10minutes basking in what had just happened, then I rose off the bed and tidied myself up a bit. I leant down and kissed him, gently squeezing his now softened cock. “I’d like some more of this sometime” I whispered, before turning and quietly letting myself out.