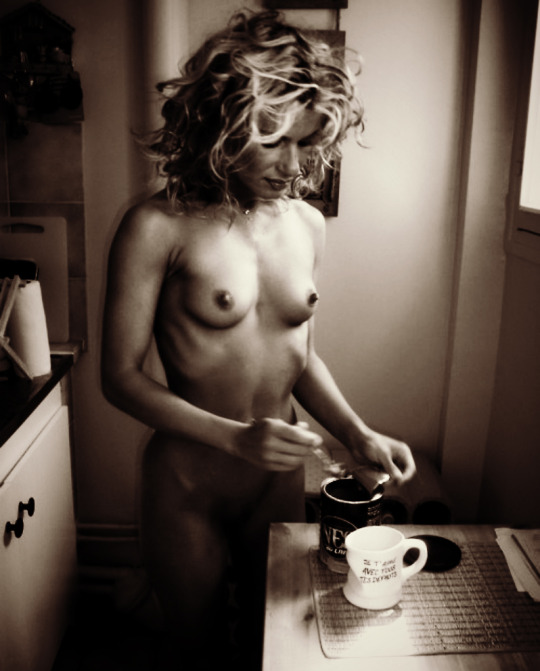 I like to dress up in a "come fuck me" outfit to go out on a Saturday night, so I put on my stockings, g-string panties, lacy bra, very short skirt and a see through blouse. I knew with this kind of an outfit I would be able to get fucked very easily and I needed to get fucked! The skirt was just longenough to cover my stocking tops barely below my pussy. I knew if I bent over just a little I would be able to give anyone I chose an excellent view of my ass and pussy covered only by the g-string which in reality didn't cover very much. In fact the hairs of my pussy would be sticking out of the g-string further enhancing my chances to get laid. I also wore my highest heels, a full 5". They make my legs look good and also make my butt stick out a bit. I was in the mood for something special maybe even kinky. How little did I realize just how kinky the evening was going to get.

I went into town to a local bar. When I entered the bar every man in the place turned and gave me a long stare. I sauntered over to the bar to order a drink. I leaned over the bar to give the bartender my order and also to give the guy I passed on my way to the bar a peek at my ass. I was hoping it would arouse him so I could get laid quickly as I wasn't in the mood to wait very long to get fucked. He was also a very good looking dude that I wanted to fuck. It did just that as it only took about 15 seconds and I realized he was coming up behind me. Before I could straighten up he had his hand on my ass between my legs rubbing the thin fabric of my g-string panties. I wiggled my ass just a bit as he was starting to get me really turned on. He slipped a finger under the g-string and ran down the full length of my cunt. His other hand was playing with my tits. By now the entire group of men in the bar were gathered around the bar watching what was going on.

I am a hard working single man who never can seem to find enough women or the right kind of women to satisfy my sexual drive. This particular Saturday evening I was in an extremely horny mood but I doubted I would find satisfaction once again. How wrong I was!!! I decided to stop off at the local bar for a quick cold one before I started my prowling for a sex starved women. When I first went into the bar there was a group of about 18 or 20 men sitting sround drinking and talking. Other than the bar maid, who everybody knew didn't put out because of her jealous husband, there was not a single chick there. I ordered a beer, giving the barmaid an appreciative look at her tight ass and cute tits barely contained within the skimpy outfit she was wearing.

Just as I was about to get up, walk out and start my prowl, a knock out chick walked through the door and wiggled up to the bar. She was dressed in a very, very short skirt which barely came below the vee of her legs and a see through blouse. Her bra was a lacy one that had many holes in it so some of the brown area around her nipples was showing. Her nipples were coverd by a stratecially placed solid area in the bra. That didn't prevent her nipples from poking the material straight out in front of her. I thought to myself that her nipples must be at least a half an inch in length to poke out that far. When she walked by me she gave me a quick once over glance that seemed to have "come fuck me" written all over it. She walked up to the bar and leaned over it to give the barmaid her order. When she leaned over her mini skirt went up enough to expose the fact that she was only wearing a g-string under it. I couldn't believe my eyes. The hairs of her pussy were sticking out from under the g-string! I thought to myself that if this girl isn't looking to get fucked I never have seen one that was!!

I walked up behind her and put my right hand between her legs stroking her pussy through the thin fabric of her g-string. When she didn't resist but wiggled her ass instead I knew I was in like Flynn. I reached around her under her blouse and bra and began playing with her tits with my free hand. In just a few seconds I could feel the fabric of her g-string getting wet from her pussy juices. I slipped a finger under it and traced the folds of her cunt with my fingernail. By this time all the men in the bar were gathered around us watching intently what was going on so I pulled the g-string aside so they could all get a good view of her pussy.

Soon I could feel my clothes being removed and I was left in just my stockings and high heels. It was very exciting !! All the guys in the bar crowded around. Their hands wereeverywhere. My legs were held open wide, and I soon felt many fingers playing with my pussy and others carressing my tits. All of a sudden I felt a wet tongue being used on mycunt. That in inself was making me excited being eaten by a stranger while being watched by many other strangers.

Several of the guys had dropped their clothes. I spotted a nice looking dick near me and grabbed it and started giving him a blow job. I was rolled onto my side and a man with a huge 12" dick rammed the full length of his cock into my pussy. Another man slid his dick into my ass. I grabbed two dicks and began jacking them off. As each man blew his cum load another would replace him. Some dicks were small and some were large but they were all very hard. By the time everyone had had a turn I had sucked and fucked almost twenty guys. My pussy and ass were a bit sore but I loved every minute of it.