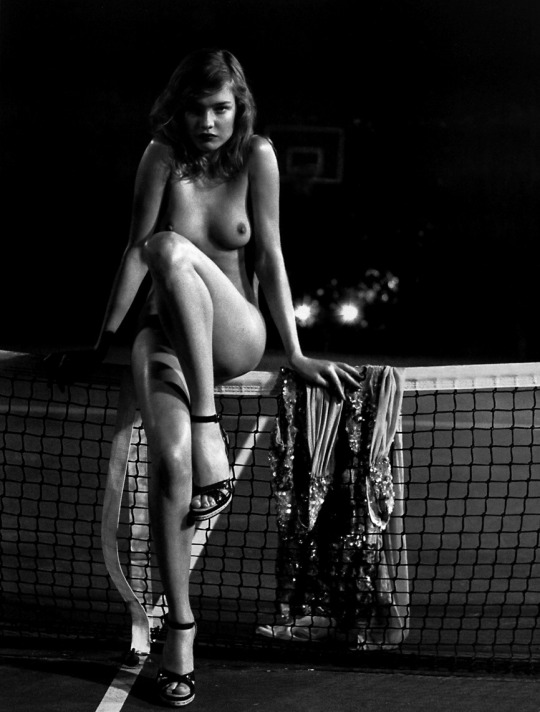 Alicia strolled along the tree-covered avenue enjoying the afternoon heat and sunshine. North Carolina was wonderful in the summer, hot, but not too hot. She was still amazed at all the greenery. There hadn't been much of that in New York City. She knew that Shirley lived next door, even though she had never actually met her. Both her and Shirley were NHRA widows. Their husbands were in the Mopar Mile High Nationals. Alicia was lonely. Maybe she could share her loneliness with Shirley. She sure as hell needed to share it with somebody.

"Hello there," a voice called from somewhere. She searched the house and lawn. She finally spotted Shirley because of a cloud of smoke being exhaled into the shade on the upper deck. Shirley was sitting on the deck with her back against the tree, smoking a cigarette.

"Come on up," Shirley called.

/>
"Alicia, I know," she interrupted. I've known you lived next door since we moved in. I've been too busy to come over. It's good to see you," Shirley said, flicking her cigarette onto the driveway.

"I'll be glad when the Indie is over," Alicia said, climbing the stairs. Perry should be home for a while.

"Ray will be gone until the Winston. That's why we moved here," Shirley said, standing. "Come on in."

"I'd rather sit outside, it's so nice this afternoon," Alicia said, looking up at the breeze blowing through the trees. The house was surrounded by a pine forrest. It was beautiful. Her eyes went to Shirley, absolutely dazzling in her knitted white dress which showed her bra and panties beneath. It was quite an outfit.

"I know. I just love this deck," Shirley said, taking a seat at one of the tables. She motioned Alicia to a second chair. Alicia turned it and sat cowboy style. Since she was wearing a short skirt her black panties were as visible as Shirley's. Both women checked each other out thoroughly. It was more than a casual glance, and they both liked what they saw.

"I get so damned lonely," Alicia said. "All my friends are back in New York. I don't know anybody here, and when I go into town they look at me like I'm a tramp. They'd probably die if they knew that Perry and I are swingers," she said />
"You sleep with other men?" Shirley was aghast.

"Men and women," Alicia nodded. "The more the merrier."

"I wish I could be so free," Shirley sighed. Ray expects me to just sit at home and keep house. He has relatives around here who keep an eye on me."

"Fuck that, you're not a prisoner. Whenever you feel trapped call me, I'll come over."

"Thanks, it will be nice having a friend close by," Shirley smiled.

"Have you got anything to drink?" Alicia said, standing suddenly.

"Of course, how thoughtless of me. Come on in," she sprang to her feet and hurried through the doors. Alicia followed slowly, giving a careful glance around before she followed Shirley inside. She closed the glass filled doors and locked them. Shirley stood looking at her, glancing from her to the lock.

"Why did you lock it?" Shirley asked nervously.

"Because I'm going to try and seduce you and I don't want any of Ray's relatives peeking in," Alicia said, dropping her dress and stepping forward in only her black, transparent slip. She put her hands on Shirley's shoulders and pulled her close.

"Do you mind?" she asked, before giving Shirley a fiery kiss. Shirley responded immediately. Alicia knew she had found a kindred spirit. She knew it when Shirley started checking her out back on the porch. Shirley withered in her arms, pulling Alicia close. They kissed that way for several minutes. When they broke the kiss they remained standing, searching each other's body with nervous fingers while they tried to calm their breathing.

"It's time to make you more Shirley said, taking the initiative. She sank down on her knees and pulled Alicia's slip down and off. She pushed Alicia back against a table, spread her legs, and pressed her mouth against Alicia's pussy.

"Oh God, you have no idea how much I needed this," Alicia gasped. Shirley smiled up into her eyes. Her tongue fluttered continuously, first between her buttery soft lips, then inside against her clit. Alicia felt her loins quivering. Fire began to rage inside her. Shirley probed deep inside her vagina, wiggled her tongue and sucked briefly, before going back to her clit. She remained there only a moment before moving on to the erogenous zone at the very top of her pussy. She tongued that for a moment and started licking her way around Alicia's pussy lips.

"Let's just keep that between you and me," Shirley said, giving Alicia's pussy a few more licks. I had a steady girl through high school, then initiations during college. It was fantastic," she said before going back to Alicia's pussy. Alicia moaned and cried for several minutes. Shirley suddenly stopped.

"Your turn," she said in a sultry voice. She stood Shirley before her, opened her dress and pulled down her panties. Shirley had a small, nearly hairless pussy that Alicia simply adored.

"Oh yeah," Alicia said in a low growl. She put her mouth against Shirley's pussy and licked vigorously while shaking her head from side to side. Shirley cried out, throwing her head back. She placed her smooth ass on the table and leaned back with her arms spread for support. Fire shot through her body with each stimulating lick of Alicia's small, stiff tongue.

Alicia gave Shirley a savage eating, while her soft hands roamed up and down Shirley's body. Shirley loved everything that Alicia was doing to her. She needed to be eaten roughly, an Alicia seemed to know that. The torturous licking and sucking was creating a huge fire in her pussy. She humped her pussy against Alicia's violent mouth, then grabbed her head and pulled, as the fire turned into an orgasm. She hunched her pussy against that lovely mouth, while grunting like an animal. Suddenly she arched her back and screamed, shuddering />
"That was a wonderful orgasm," Shirley said dreamily. She climbed slowly to her feet. The doorknob turned. Somebody tried the door, then pounded on it.

"Tell them to get fucked, this is your house," Alicia said, as she dressed.

"Please, I don't want any trouble," Shirley entreated. Alicia finished dressing, brushed down her hair and made her way to the door. A sour old woman stood glaring through the widow.

"I know what you are," she hissed in an evil voice as Alicia started to pass.

The old woman gasped in outrage, then stood with her hand on her pussy, looking at Alicia thoughtfully as she negotiated the stairs.