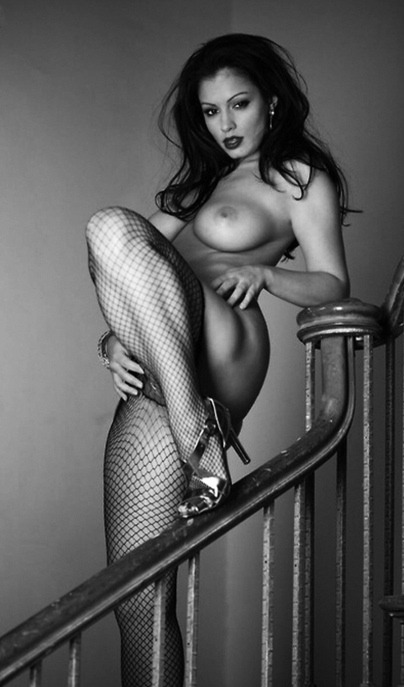 Derek closed his laptop, signaling that it was the end of his work shift. He had spent the last twelve hours working tirelessly on a news article that had been turned down by his boss three times already. In the past month, she had only run one of his articles.

He put on his brown jacket and packed his laptop up in his briefcase. It was pathetic how he had allowed himself to fall so far.

He took the subway home every night to his lonely apartment in midtown Manhattan. There, no one paid attention to any of the strange faces that passed in the street and every scream was muffled by the sound of the buses honking their horns.

He entered a very shabby and dimly lit apartment. He was greeted by his servant, Heather, who was dressed in a form fitting French maid outfit. Her skin was light and pale, with long blonde hair that was braided and out of her face. Her eyes were a soft blue.

She wore a black garter belt attached to her nude stockings. On her petite and docile feet was a pair of three-inch heels. The heel was just long enough to give her legs an extra bit of sexiness but not enough to make her taller than he was. She greeted him with her head slightly bowed and her eyes to his shoes.

â€œWelcome home, master,â€ she said, bending down to her knees. She kissed both of his shoes and kept her head down.

â€œYou may take them off,â€ Derek said, removing his own jacket and placing his briefcase on a table next to the door. He watched as she slowly and gently untied his black dress shoes.

Every movement she made was fluid and graceful. It was hard to believe that in high school, she used to be a cheerleader, full of spunk and bursting with energy. Little did he know that she would become this beautiful creature that served him in his own home.

Their relationship was not something that many people would understand, even in a city as liberal as New York. He started dating her in college, after a night of partying at a local get together.

He walked to the bathroom as Heather put his briefcase and jacket away. She always had a hot bath waiting for him to soak into after a long day at work. Next to the tub was a glass of red wine. He quickly undressed, tossed all of his clothes aside, and lowered himself into the steaming hot water.

His muscles instantly loosened and he was in a world of relaxation. The wine brought a wonderful warming sensation to his face. Even after four years of having Heather, he would never get bored of her willingness to bend to his every will.

After his bath, Heather dressed him in his bathrobe and followed behind him as he walked to the living room. He sat down on a recliner and leaned back, sighing with pleasure. She got on her knees and bowed her head again.

â€œDo so,â€ he loved it when she asked that question. He leaned back a little more to get himself comfortable.

Heather inched herself closer to him and then moved to his crotch. He was already nice and erect for her. She grabbed the base of his penis and opened her little mouth to suck on the head of his cock.

â€œMmmmâ€¦â€ he moaned softly, feeling the initial wetness of her beautiful lips.

She began to swallow more of him, little by little, until his whole cock was deep in her mouth. Her throat was tight but she forced it in anyway.

He could feel the back of her throat closing with every thrust as she tried her hardest not to gag on his thickness. His balls tightened up against him as he felt her thrust his cock faster and faster down her throat.

â€œUghâ€¦â€ he sighed, watching her blonde head move back and forth rhythmically.

â€œLook up at me,â€ he commanded. Instantly, her blue eyes looked up innocently at him as she continued to keep sucking him off.

â€œFuckâ€¦â€ he said, grabbing the armrests of the recliner with both of his hands,

â€œIâ€™m getting so closeâ€¦â€ She knew exactly what to do. With a finger, she reached under his balls and pressed against the sensitive skin as she thrust his cock down her throat.

He could feel her swallow and her throat tighten up while she pressed against the outside of his prostate. The pleasure was building up at the head of his cock.

â€œUghâ€¦â€ he moaned, feeling more pressure build up. Even though he thought it was impossible, she managed to get him even deeper in her throat. Despite the fact he was about to bust it all over her throat, he pushed her off of him.

â€œDid I say make me cum?â€ he asked her, raising his voice.

She closed her eyes tightly and whispered, â€œNo master.â€

â€œYou have made me unhappy. Come here.â€

He pulled out the rope from the middle of his bathrobe. The bathrobe fell off behind him as he stood up.

Heather crawled towards him, whimpering.

He positioned her wrists next to a leg of the table and tied her there. He had nailed his coffee table down for this exact reason. Taking a knife from the top of the table, he gently sliced down the front of her outfit.

She did not wear any panties beneath her garter belt and her waxed, beautiful pussy was exposed. He put the knife down on the ground and gave her pussy a good lick. She always tasted sweet.

â€œMmm!â€ she let out a moan. He spread her legs wide open and buried his tongue deep inside her, before moving it towards her clit. Her clit twitched as her back began to arch. He massaged her with his tongue, moving it in circular motions.

â€œAhâ€¦ ughâ€¦â€ she moaned softly. He eased his index finger inside her, feeling how wet her silky pussy was getting. It was time.

His cock was still erect and throbbing. He pulled apart her cut open outfit, exposing beautiful C cup breasts with perky pink nipples. He grabbed one of them with his fingers.

â€œOhâ€¦â€ she sighed, closing her eyes. Then he thrust his cock inside her, tearing apart her pussy that was always so tight, no matter what he did to her. He could feel her silky wetness lubricating his cock upon his entry.

â€œUgh!â€ she moaned a little louder. He squeezed her nipple harder,

With one hand still on her nipple and the thumb of his other hand against her clit, he began to fuck her missionary style. Her pussy contracted immediately as she struggled to keep her moans quiet.

â€œOh yeah…â€ Derek said, fucking her harder and harder. Her pussy kept getting wetter and wetter for him and he knew she was enjoying it. I
t took all of his concentration to not finish before she did. It was always worth it for him.

Despite his efforts, he could feel the climax building up in the head of his cock again. He tried to turn his eyes away from her beautiful tits, which were bouncing in circular motions. Still, her pussy gripped him tighter and tighter. He licked his thumb and started rubbing her clit again.

She clenched her lips tightly to not be too loud. Her pussy contracted one more time as she squeezed his cock with all her might. He could not hold it in anymore.

â€œFuck!â€ he yelled, â€œUgh!â€ He rammed his cock completely inside her and let his climax pulse right out of the head of his cock.