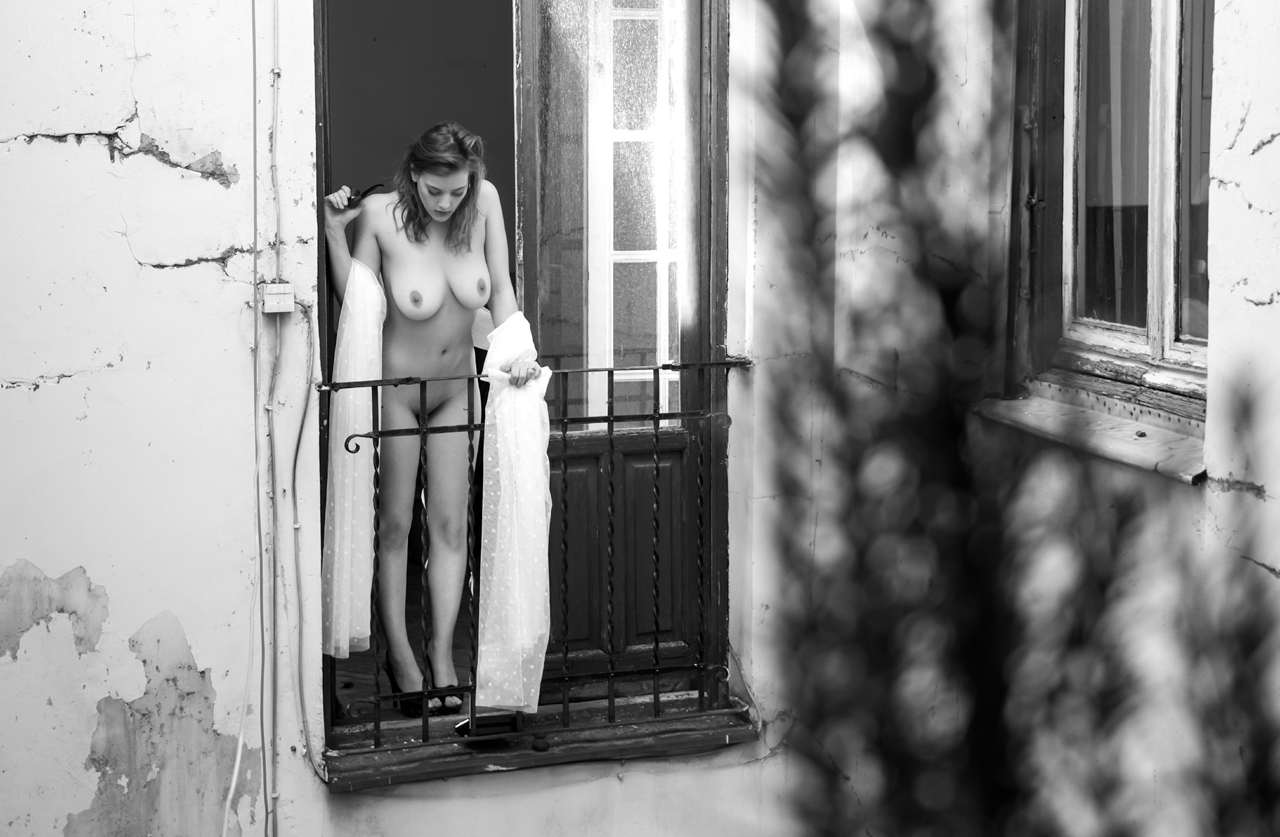 “I don't really care where you live at,” the feminine voice echoed in my head. “Just turn around boy and let me hit that,” thumped and pounded, into my body. ”Don't be a little bitch with your chit chat,” bodies blurred in my alcohol assisted experience. ”Just show me where your dick's at,” I had to smile, the song kept going, getting me wetter with each beat.

Short skirt, crop top, hair pulled back, sportin’ deep red lips that sipped at my customized drink. I was feeling hot, and getting into the groove of the scene. My girlfriends surrounded me for the moment dancing in rhythm with the suggestive lyrics.

Did I say I was wearing anything under my skirt? The heat of the bodies registered, the smells drifted around me, I was trying to find my prey. But in the chaos of the floor, there wasn’t much hope. Alcohol tainted the scent and I needed to retreat to the sides. But the music had lured me there and held me fast. My hips swayed, accenting my favorite asset. Sure I had decent sized breasts, but felt that I had stronger qualities lower on my body.

A few more songs and my drink disappeared; Time for a new one. A quick show of my empty glass and my friends agreed: Back to our sectionals where we had left our 750ml. Never understood the prestige of name brand Vodka, all tasted the same after the first one, but that is how its done and I wasn’t about to disturb a ritual that had worked for us. Along the way, my eyes caught a glimpse. Short dark hair, tanned, modestly dressed, enjoying the music while taking care of his own elixir. Three of them: I needed two partners for this one.

One more round at the table and I assessed my strategy. Three guys, no girls. There were five of us. Bring them over here or go over there. I wanted them on our turf, our conditions, my mind was made up: It was up to me to lure them over. I stood up and gave the signal to my friends. They had already approved of my decision, now it was up to me. It was more courtesy, just to let them know that I was making my move.

For most, it did not take much. But these guys were not mindless, and definitely made me work. Alex, the one I spotted, was a gentleman. Stood up to introduce himself, offered me a seat as well as a drink. I countered and invited him over to our table. I could tell his friends were eager, but he played it cool. Insisted that I have at least one drink with them. A waitress paused, secretly took his order and left. Couldn’t help but feel a part of a ed act that was taking place. For the first time in a while, I felt foreign in this place. He had turned the table and had me where he wanted me.

The drinks came just after a few introductions to his friends, Neil and Sako. Shots. The deal was one drink. A single smooth shot and I was anxious to change the venue. Smooth, it made me hesitate. This was a good drink and I had no idea what it was. Alex smiled. He stood, held out his hand to lift me form my seat, and whispered in my ear. “A deal is a deal. Thanks for the drink.”

I almost felt bad about what was going to happen. Alex and his friends followed me back, two of them little puppies for the slaughter, Alex, a gentleman to the end, perhaps na?, but innocence undeserving? We let them in, cutting off any escape. Everything was set into motion, the girls knew what to do. I had tripped the trap and earned my right for first choice. I never did let go of his hand signaling to the others that this one was mine. Eight shots, synchronized and quickly put away. The bottle was near empty, but it was enough.

Alex relaxed. His body sank into the softness of his seat. A slow look at me told me that his buzz was in full swing. I made my move and slid myself into his lap. One leg on each side, facing him with my hands sliding around his neck, up the back of his head. In one fluid motion, I pressed myself into him and landed on his lips. I felt hesitation in his hands. Motionless. I continued, seeing if I could provoke a response. His hands moved, across my legs, up my sides, to my back. His breadth was unsteady, nervousness. Even with the alcohol numbing his sensibilities, insecurity surfaced.

Something was about to be said. I pulled back, one finger to his mouth, with the other hand going through his hair. Silky. Once I knew he wouldn’t speak, my hands grasped his head and I kissed him again. Tongue! He was not inexperienced. As a matter of fact, he was quite good. The switch flipped, his heart raced, but now he had conceded himself to me. I tasted the mix of drinks that lingered. One of them reminded me of the smoothness he had given to me earlier. Nice.

New song. “If I can make you dance I can make you dance baby, Hold on to my hips my hips my hips.” I grinded into him. His hardness was no secret, pushing up against me. It must have made him nervous, but his attempt to pull away opened up an opportunity. Instinctively, my own hips pulled back, hands slid down his chest and found his waistband. Snug. I couldn’t slip them under. Like any good Martial Artist, I adapted and changed my technique.

A belt, single latch style. In less than a chorus of the song I had it free and loose. One button undone in the process and I had my access. But since the game plan changed, I was no longer going for a simple tease. I unzipped his pants and reached inside. As expected, boxers. Weaving through the opening, my fingers easily found his heated flesh inside. He gasped, breaking the kiss for a moment, but I did not want him to become distracted just yet. Better put, I did not want him to lose focus on the kiss. I forced my lips onto his again, reaching inside his mouth maintaining his focus.

Stealth and dexterity, I managed to release him. Fully trapped in my hands, all the way down to his soft package, I had exposed what I wanted. I squeezed until I felt his excitement bead and drip onto my hands. He was ready.

Back to attack position. Hands back up around his head, hips forward, wetness pressing against him. No more fabric between us.

“Two, three, four, five, six, seven, eight and back.” Another song, how appropriate. I could feel him, so nice, so exciting, so hot! Up against me, stimulating me, for my first orgasm. I had already phased out the club. I was in the zone, honed on my prey. Almost ready to devour.

I lifted up, taking him with me, a trick I had learned, developed and perfected. Still kissing him, I managed to position him much like a crocodile maneuvers his food for easy swallowing. Perfect. One movement down and I had him inside of me.

Another gasp broke the kiss. His eyes widened. I shook my head and my finger across his lips. No protests, no escape. I moved, smiled, and danced. The bass guided me, told me what to do. Up, down, forward, back, side to side, clench, release. I may have been the hunter, but now that I had taken him down, the music took control. The ritual started. Leaning back signaled the beginning.

Alex held on for the ride, no longer able to fight it. Grabbing my hips, he tried to anticipate my movements. It took him a while, but by the next song, our bodies synced. No matter how random it might have seemed, he found a pattern. No man had ever been able to match me. Surprising.

I focused on the feeling. Sensing his depth, his shape, the texture, all somewhat familiar, but still unique as a fingerprint. He was going the distance. Second orgasm and building on a third. Usually, I could sense when they were close to giving up, but I was normally not this distracted. He made me feel good. It wasn’t just about the hunt this time. Something more was at stake. He wasn’t fighting me, he was helping me, working with me; Almost as if he was pushing me to my orgasms. Another song.

Then I felt it: The subtle change that signals the beginning of the end. Even his breathing altered. I was close and felt him fight to stay his own. How chivalrous. His grip tightened. Almost there, the song was at the bridge: the middle of the mix, the transition from one song to the next, I felt him swell and tighten. The old song had almost faded out completely, one more beat, a pause and then a clean cut over. In that moment, he released himself. Intensity increased, he pushed into me, violently, the last spasms of life. My own orgasm hit, I wasn’t about to let up.

“They heard I was good,” he fought it, abruptly releasing before holding tight again. “They wanna see if it’s true,” I lost control, moaning into his ear. “They know you’re the one I wanna give it to,” the last surge, fighting to the end, sustaining me. “I can see you want me too,” I held him inside of me. “Now it’s Me & U,” I found his lips again.

Easing back, tucking him into place and securing him as he once was, I tried to make sure it was not a messy kill. Though I am sure I left some evidence behind and knew that I would not be able to keep it all to myself either. I always kept a soft cotton pair with me, stashed away. The signal that I was done for the night, that I had a successful hunt. I looked around. One down, two to go: By the looks of it, another couple of songs and our stay here would be over. One last kiss for Alex before I dismounted. Looking back, I almost felt bad for him, leaving him there, slouched in the chair, completely spent and vulnerable. I turned, concealing my smile from him. I would remember this one for some time.