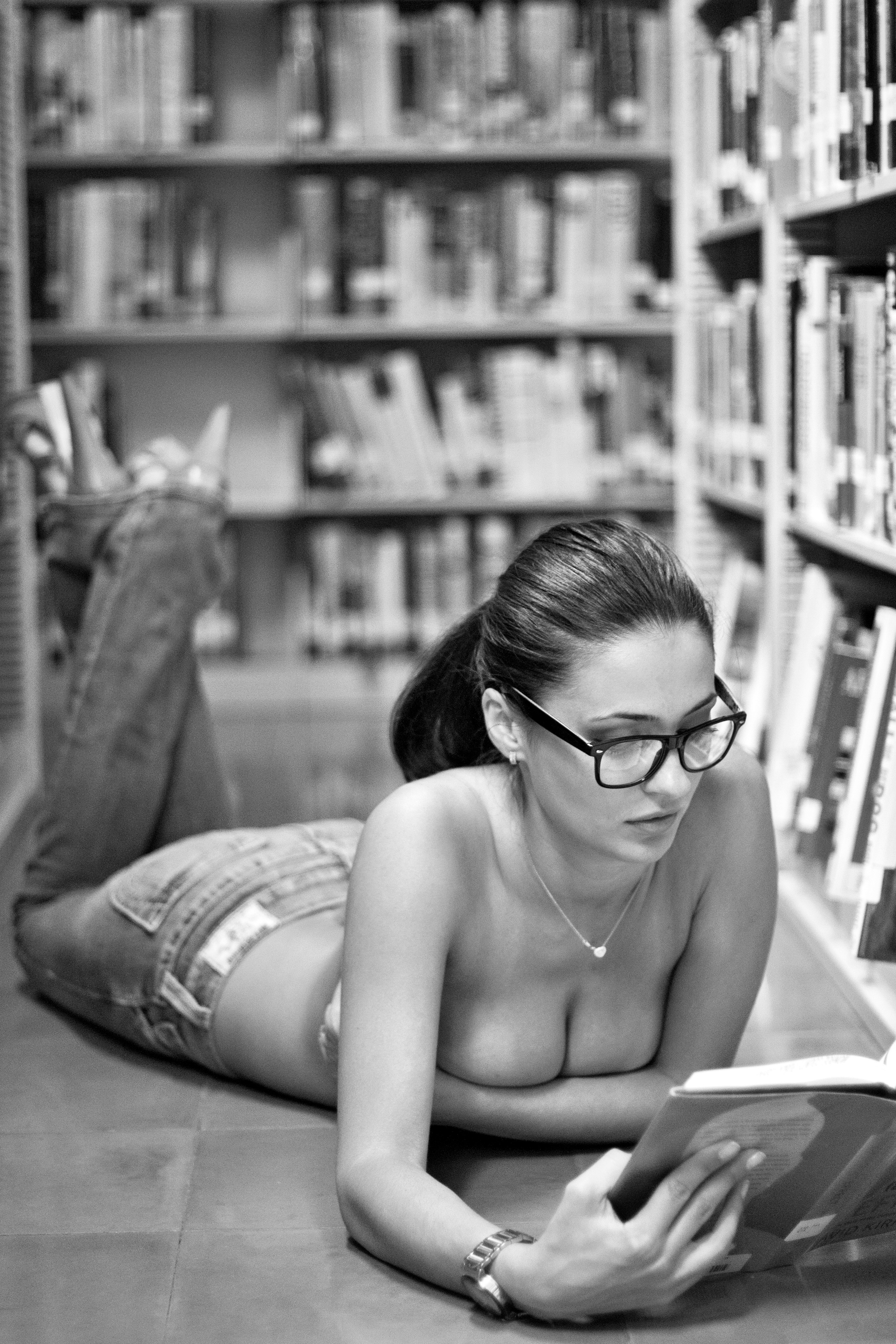 This happened back when I was in my late twenties.
I had been seeing my girlfriend, Trudi, for some months and we were making out
with me touching her tits, but nothing more.
She had a Christian upbringing and was not ready to go all the way.
She lived by herself some 10 miles from my house, and we never slept over by
each other. We did however go out frequently for dinner, movies etc.

As usual on a workday I drove over to her early in the morning to pick her up
(we both worked for the same company). When I knocked on her door, I was
by Trudi wearing only a bathrobe, having just finished her morning
bath. She had overslept and was not yet ready to go, so I had to come
inside and wait for her, while she dressed. Fine by me, we had a flexible
employer, and could come and go almost as we pleased.
But that day, none of us would get to work at all!

When I sat down to wait for her, we chatted a bit while she dried her hair.
While running the towel thru her hair, her bathrobe opened slightly and I got
a good view of her nicely rounded tits, not huge, more like melons, but with
stunningly protruding nipples. I admit to being a breast fanatic and hers
was certainly in the top ten category, albeit on the small side.
Also I noticed she had no panties on, and her red bush was in clear view.
Trudi is a natural redhead and does not shave or trim her pubic hair.

Me being a rather horny guy (and quite frustrated after prolonged petting only),
I immediately got a hardon. After a slight hesitation, I took off my jacket
and moved over to her, starting to kiss her, ever so gently.
She first tried to push me away, saying something about being late,
but succumbed to my persuasions in no time. I also brought my hands inside her
bathrobe and started to touch her pubic mound, but again she tried to stop me.
I was getting hornier and would not let her, but pushed one finger
inside her pussy while cupping one of her tits.

She stopped kissing me and vigorously tried to push me away.
I had her up against the wall and managed to hold her in place, and continued
with two fingers inserted in her pussy and my thumb rubbing her clit.
This made her moan out loud with wide open eyes and her resistance weakened.
I moved to her left tit and started to suck and on her nipple.
This made her even more ecstatic and soon she stopped struggling altogether.
I was moving from breast to breast, feasting on her now stiff nipples.

Suddenly she held her breath, started to shake uncontrollably and showered
my hand with her juices, yelling and slumped into me.
I managed to hold her and moved her to the couch, placing her on her back with
her bathrobe now removed. I hurried to shed my clothes before she came to
her senses and managed to straddle her chest with my phallus right in her face.
Her eyes were wide open, but she remained quiet. Not so much, when I tried to
enter my dick in her mouth! She moved her head from side to side, resisting
my invasion, until I reached behind her, tugged her hair and started to slide
my steel member inside her. she uttered, but in vain.

I no longer had the energy to control myself and my dick started to swell.
I pushed it all the way down her throat before releasing my first spermload.
She started to gag again and my cream came rushing out of her nose and mouth,
while more spurts shot inside her. I think she may have swallowed some of my
delicious semen cocktail, but most of it ran down her cheeks and onto the couch.
After 5-6 spurts I was spent and withdrew from her mouth. She looked drenched!

She was still somewhat in a state of shock and remained quiet on the couch.
I moved down her front, licking and kissing her neck and chest, paying special
attention to her erect nipples, biting and chewing on them carefully.
She only gave soft moans and offered no resistance to my wet attack on her body.

I took hold of her legs and put them over each of my shoulders in order to
get an easy access to Trudi's still virginal pussy. I placed the head of my
cock on the entrance of her wet pussy and she sat up with a scream /> This had no effect on me and I started to push my cock inside her warm
and juicy fuck hole. She started to scream and tried to get up, but I
managed to hold her down and the intrusion was successful. I had only
entered a few inches when I met her virginal barrier. Although she was tight,
her pussy walls clamping down on my cock, I managed to push hard on her hymen
and forced my way inside her. She was no longer screaming, more like sobbing
and seemed to accept the inevitable. After all, I was no mere stranger,
but her boyfriend and although her religion taught her to guard her
womanhood until married, she found her unwanted experience quite pleasant.
"Sweet Jesus, what are you doing to me?" she whispered.

I no longer needed to hold her down and started a relaxing in-out motion,
going slow at first, but pumping hard in between. Her pussy walls still
clung to my manhood, but her initial moisture and added blood (surprisingly
small quantity) gave me enough lubrication to keep a steady rhythm.
I bent down to lick her tears from her face and kissed her passionately.
She responded equally satisfied and I started to french kiss her, forcing
my tongue inside her mouth. At first she hesitated, but soon opened up
and let me explore her previously well-fucked cave. I could taste my own
love potion and she her own cunt juice, both seeming to enjoy the experience.

Since I already had cum (and copious) in her mouth, I managed to keep fucking
her magical cunt for almost thirty minutes, during which Trudi had at least
3 shaking orgasms, before my love pole started to emanate signs of eruption.
I think Trudi also could feel the increased swelling, because she opened her
eyes wide and tried to utter her objection to an internal ejaculation.
After all she was not using any birth control and I had no rubber on,
but as we were still locked in a sloppy oral engagement, her words were
unintelligible and although she started to squirm, her actions were futile.
Soon after I could feel my baby-making lava starting to boil inside my
balls and with a final and a deep thrust I released my hefty
flow of semen way inside my darling Trudi.
I never had cum as strongly and so potently in my life, but after several
powerful spurts, my sperm volcano was finally drained completely.
Wow, what a heavenly sensation, to know that her warm and glowing uterus now
was flooded with my potent sailors.
Of course, I may have impregnated her and ruined her family life
(her whole family strongly opposed abortion and premarital sex likewise),
but all I could think of was the satisfaction of having conquered this
ripe cherry and given her my complete intimate attention.

After the initial shock of being molested gave in, Trudi started to cry and
punch my chest, claiming "Oh My God! You have raped me! I may be with child."
Lying face to face I held her close and tried to comfort her as best I could.
Soon she stopped banging my chest and seemed to fall into sleep.
I held her still and also nodded off for a bit.

After maybe an hour or so, I woke and felt my cock stirring again.
Trudi was still asleep and I let go, with her face down on the couch.
Soon my pole was at full mast and seeing her naked plump ass and thighs,
made me horny as hell. I started to stroke her buttocks, opening up
her ass cheeks and getting a full view of her lovely tiny asshole.
Bending down I licked and kissed her behind and toggled my index finger
between her vaginal crack and her rear cavity.
Sound asleep, Trudi only shook a little and I continued my assault, making
sure there were plenty of saliva and pussy syrup going inside her asshole.

When I no longer could keep my urges, I placed my cock's head at her rear
entrance and started to push. Due to her sleep, there were limited resistance
from her sphincter and with a quick shove I was greeted to another warm and
tight fuck pit. With a high-pitched squeal, Trudi abruptly woke and tried to
escape her first taste of cock in her virgin asshole.
I held her hips firmly and continued to push inside her luscious butt.
"OOOWWW!! What are You doing? Please stop! It hurts….."
Once I was fully imbedded in her ass, I stopped and let her adjust to the
unwelcome invasion. After a while I began a slow and steady motion inside her
hot crack, and she stopped whimpering and started to moan more and more.
Soon she was so hot I could feel her pussy getting wet once more and she cried
"AAAHH! Yesss, more, it feels so good!" and started to cum violently.
This was more than I could handle and my cock exploded deep inside her bowels.
Spurt after spurt of hot lava filled her crater and leaked out, seeping down
to her cunt and thighs. I kept my cock inside her as long as I could,
but soon it deflated and I had to withdraw. A gush of sperm leaked out
and wet her couch even more. It badly needed cleaning!

After yet another assault on her sensual body, Trudi was now exhausted
and we both fell asleep again, clutching each other.
No work for the wicked that day!

Epilog:
We continued for a few months to have mind-blowing sex after Trudi's first
unwillingly initiation, but since I was not able to enter her religious domain
(me being an atheist), she decided I could never be her spouse and moved back
to her native country, her belly now almost bursting.
After nine months Trudi gave birth to a beautiful, healthy baby girl and
named her Emma. She now lives with a christian bloke and are truly content.
Her family dismissed her at first, but after her father had passed away,
her mother finally gave in and reunited with her daughter and granddaughter.
Myself? I was somewhat taken aback by Trudi leaving me, and not letting me
get to know our love-child, but soon went on to greener pastures,
i.e. more fucking with hot and horny maidens (not always reluctant ones)!