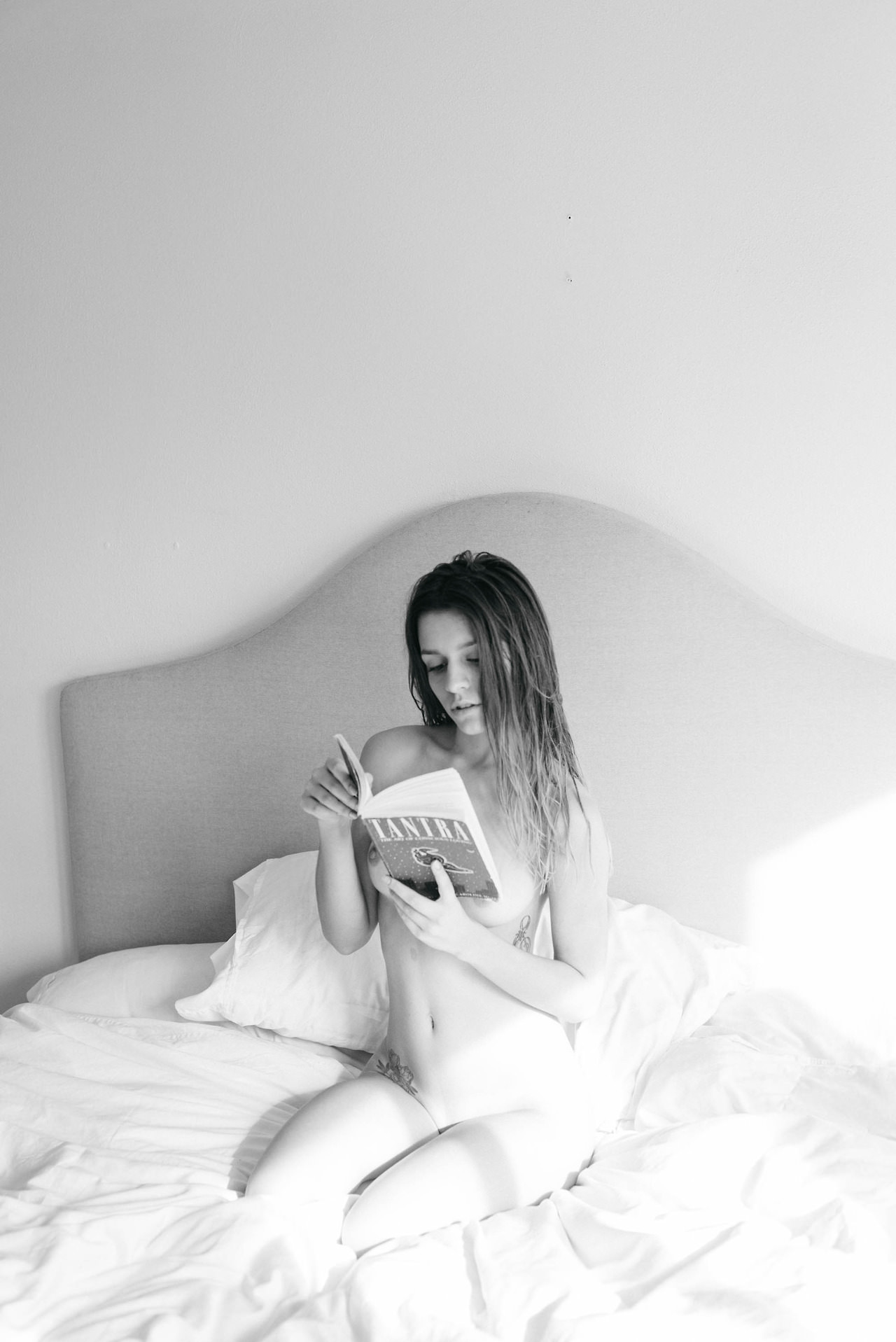 Jane Crawford looked nervously around the outer office of PIG studios while trying to maintain her outer calm. "Judas priest," she mumbled under her breath. "What the hell am I doing here?" She picked up a two year old copy of People magazine to try and take her mind off the reason for her appointment. She was just getting interested in an article about face lifts, tummy tucks, and breast implants of the stars when like a gun shot a woman from the half open door to the inner offices called out her name. "You're Jane?" the pretty twenty something blonde asked while ushering her towards the rear of the office suite. "Uh, yeah," she replied dumbly. "Mz. Martin will be with you shortly," the blonde said while offering Jane a chair. "By the way," she added, "my name's Barb, I hope to see you around, and good luck." Jane replied with a nod of her head, "it was nice to meet you." With that, Barb scooted out of the room, leaving Jane alone again with her own private thoughts. The office was well appointed with plants and pictures, and to pass the time Jane tried to see if she could recognized anyone in the large array of photographs hanging on the wall. But before she had much chance to peruse them the door burst open and in came Beth Martin.
"Sorry to keep you waiting, Mz. Crawford," the fortyish woman said while plopping down in the chair behind her large impressive desk. "UH, no problem," Jane replied softly, "I've only been waiting a few minutes." "Good," Beth answered quickly. "So let's get right down to business, I don't believe in beating around the bush!" "Do you understand exactly what we do here at PIG studios?" Beth asked. "I think so," Jane replied, "you make, uh, movies with people having sex." "That's only partially correct," Beth quickly rejoined. "We specialized in films about plump or pregnant white women having sex with massively hung black men!" Jane had of course known about this before she made the appointment, but just hearing it spoken out loud, and so casually at that, made her shiver! "So," Beth Martin asked. "Do you want to continue with the interview?" "You may leave right now with no hard feelings what so ever!" Jane cleared her throat and nodded her head while replying, "Yes, let's />
"Good," Beth replied with a smile, "the first thing I have to do is see your body." "If you don't measure up, there's no use in going on!" Jane was a little taken aback at the request and in a small voice asked, "Y-you mean right here, now?!?" "Right here and now," Beth answered evenly. "Have you got a problem with that?" "Cuz if you do, you won't make it in this business, I can guarantee you that!" "No, that's all right," Jane replied, "you just took me by surprise, that's all." "Okay then," Beth said with a nod, "let's get to it." Jane stood up and after taking a deep breath slowly began removing her clothing until she was down to only her bra and panties. "Hold it right there for a moment," Beth ordered. "Now come around to my side of the desk!" Jane shuffled around the desk and stopped only a couple of feet in front of Beth Martin. "How much do you weigh, Jane?" she asked softly. "Uh, about two fifteen," she answered. "Why, is that too much?" "Not at all," Beth replied smoothly. "Our customers want our girls full figured but not fat lard asses!" "And it's obvious that even though you're big, you have nice "By the way, what are your "I'm not sure exactly," Jane replied, "but I'm about 44DD-32-42." "Very nice indeed," Beth answered under her breath. "Now lose the bra and panties!"

With her hands shaking, Jane undid the catches on her oversized brassiere and let it slip from her shoulders with a slight shrug. Then as a captivated Beth looked on, she slowly slid her huge bikini panties down over her well padded thighs. "My god!" Beth Martin gasped when Jane's neatly trimmed ash blonde bush came into view. "You're simply dripping!" "Have you ever had a woman suck your pussy?" Beth asked huskily. "N- no," Jane stammered while Beth casually ran her finger up and down the length of her crack. Beth used her free hand to clean off her desk before ordering, "Okay, honey, now sit your plumb bottom down and spread your legs!" With her legs beginning to wobble from all the excitement, Jane rested her fat ass on the edge of the desk and spread her heavy thighs wide apart, leaving her most private parts open and available to the hungry mouthed little bitch. Beth leaned in close and inhaled a deep breath of the excited woman's aroma, causing both of them to moan softly as the sexual tension in room shot up ten fold! "I'm gonna really enjoy this," Beth sighed while pressing her mouth into Jane's gaping organ. Jane's whole body stiffened as the over active tongue of the hot mouthed slut bored its way deep inside of her molten vagina. "O-oh my!" the aroused plumper gasped. "N-never in my whole Beth grabbed a handful of ass in each of her tiny hands as she literally devoured the trembling woman's exploding pussy! Without even thinking about it Jane grabbed one of her massive breasts and fed the hard pink nipple into her eager mouth while thrusting her pussy forward into Beth's eager mouth! In only a matter of minutes Jane's pussy lurched hard several times before incredibly satisfying orgasms ripped through her loins and clit at the speed of light, leaving her shaken and spent like a over used wash rag! Beth slumped back in her chair with a thin coating of Jane's cunt juice shining all over her happy face! With her hand shaking, she pushed a button on the intercom and ordered, "Barb, find The Snake and send him right in!"

Beth idly let her hand slip up her skirt and inside her panties where she began casually masturbating her by now fully erect clitoris. "You have a wonderful body," she sighed, while staring at Jane's large chest. "Before James gets here we should go over a few things," she added. "First of all, during working hours you will always be totally naked and available for me or the other actors to use you as we see fit!" "As you will find out, James, or as we call him in our movies, The Black Snake, has an almost insatiable appetite of plump young white women!" "You will be required to satisfy him not only with your pussy, but orally as well!" "Do I make myself clear?!" "Yes, ma'am," Jane replied softly. "I-I just don't want to be abused, that's all." "Don't worry, dear," the masturbating woman smiled, "you're gonna enjoy every minute of it." Just then they were interrupted by a knock on the door. "Come on in!" Beth Martin shouted. "It's unlocked!" Jane turned to see who was there, and with her eyes growing to the size of saucers she gaped openly as the naked, Black Snake entered the room with a monstrous erection bobbing menacingly in front of him!

He crossed the room quickly and offered his hand to Jane and said, "Hi, my name's James Cotter!" "And "Jane Crawford," she replied weakly while staring at his incredible endowment. "Eleven and a half inches!" he laughed. that?" she asked. "It's eleven and a half inches long," he replied with a smile. "That's always the first thing everybody asks!" "I see," Jane answered softly, "it certainly is the biggest one I've ever seen." All the time he was talking he was taking in the lushness of her full figured body, which only increased the length and thickness of his hardon. "Do you mind?" he asked while reaching out to caress her pretty breasts. "N- no," she moaned, "be my guest." Immediately he took the two massive beauties into his large hands and began kneading pinching them almost roughly. "O-oh James!" she gasped. "T-that feels so gooooood!" "Hurry up and fuck me!!!" "She's hot as a she said to Beth. "Where on earth did you find her!?!" "She answered out ad in the paper," Beth replied with glazed over eyes. James took his place between Jane's pure white thighs while letting the head of his thick cudgel press gently but insistently against her straining opening. "You like big black cocks, Jane?" he asked softly while twisting her nipples. she gasped. "I love them!!!" "Good," he grinned." "Then I think you're really gonna love this!" And with those simple words he shoved his slim powerful hips forward, driving his boner deep into Jane's pussy, bringing her a massive orgasm on the very first stroke!!!

"Fuck her!" Beth Martin ordered while her fingers buried themselves deep inside her white hot pussy. "Make the fat assed white cunt beg for mercy!" James was by now powering his thick love muscle in and out of Jane's poor little pussy with almost inhuman ferocity! Her eyes were glazed over and her huge boobs bounced about crazily as the huge pecker pounded her pussy into complete and utter submission! "You like it, cunt?" he asked between strokes. fuck yes!" came her reply. "Fuck me like the white slut I am, black stud man!" "You fucking fat assed whore!" he said through gritted teeth. "I'm gonna fucking make your pussy pay for your big fucking mouth!!!" "Hah!" she shot back. "You're gonna have to do better than that, dick man!" "Show me what you've got, boy!!!" he spat. "You fucking whore, I'm gonna fuck you to death!!!" Then as if he was shoved into over drive, James pummeled Jane's poor little organ until both of them screamed in unison as their climaxes whipsawed through their pulsating sex organs, completely draining them of every last bit of energy they had possessed! With his legs just about to give way, James tumbled forward, landing on Jane's lush body with his face nestled between her sweat covered breasts, while unbeknownst to either of them, Beth Martin had had a couple of hard cums herself thanks to her very practiced middle finger!!!

With the smell of sex and sweat permeating the air Bath Martin finally offered, "So you see, that's how we do things around here." "Think you can take it?" Jane rolled her head to the side and gave her reply as a question. "Now, what did you say about sucking some cock!?!" Beth just smiled and said, "Baby, you're hire!!!"